At Home, At the Library and a word about Cameras


These shots were taken with our new camera.  As a now die-hard point-and-shoot fan, I upgraded to the Powershot S95 which has the body and convenience of a small point-and-shoot but the adjustability and improved optics of a DSLR.  Things have come a long way for cameras since I began shooting in high school.  I used my dad's old Pentax (could hammer nails with it or drop it off a 2-story building) SLR with screw in lenses and film.  In those days, you had no idea if the film wound properly or if you metered right until it was all over.
I know that I might get better photos with a true DLSR (and some good lenses) but as a participant and "first responder" in the daily life of Sidney, I can't have a bulky piece of equipment.  I've seen a few moms get spectacular photos of their children with good DSLR cameras but I honestly think for many people, it's more equipment than they need or can handle.   I get a little indignant when people think they need such a fancy piece of equipment for close-quarters, documentary-style, still-on-duty mom photography when a good point and shoot will more than suffice.  I have been very surprised by some of the pictures I've been able to take, many on this blog, where I've pushed the camera and taken some decent shots.  Now I hope to keep pushing with this camera to get the crispness and depth of field I've been missing.
With these I was just starting to mess around with how the camera deals with dim lighting and multi-light sources. 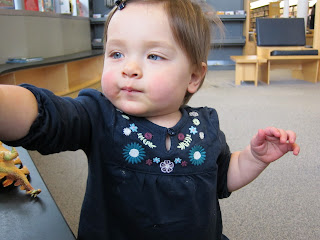 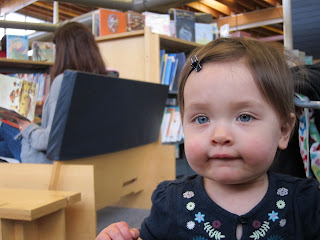 I like this trend in taking pictures! Hi Sidney! I think you are very cute!