Zoo visit today! New lion cubs were recently born at the Woodland Park Zoo but the most amusing member of the family to watch was "Mom" who, like other species, had to physically get up and intervene when the kids got too rambunctious. Motherhood: The animal kingdom's most tiring job. 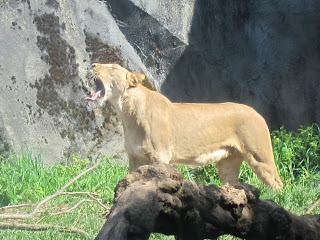 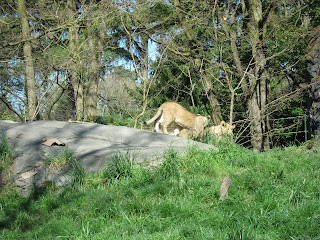 The Internet is with you or against you

Today I happened to be witness to the power of the Internet and social media.  Mostly it was liberating and worthy of a fist pump as the "little guy" emerged victorious, but it also hinted at how devastating it would be if this power were directed wrongly. 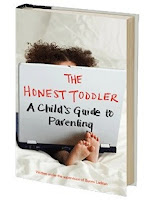 Allow me to set the scene.

There are 2 entities with the word "honest" in them: "Honest Company" (the natural diaper and household product company founded by Jessica Alba) and "Honest Toddler" (the pseudonym of a writer/Facebook'er/Tweeter who creates funny and truthful observations from a toddler's perspective.)  I subscribe to both of them, in that one sends me diapers on a monthly basis and the other entertains me on a daily basis.  They could not be more different.

But evidently Honest Company's lawyers thought it would be a smart thing to call Honest Toddler's sole proprietor and writer, Bunmi Laditan, and threaten her with a cease and desist order.  This is because they thought her brand might "cause confusion" between the two which would "get expensive" for her if she didn't delete her blog, Facebook page and Twitter account.  How scary and unreasonable.

However the power of the Internet should not be taken lightly.  Who needs a lawyer when you can exact "intervengeance" (internet vengeance--I just made up a new word!) on someone who done ya' wrong?  Keep in mind Honest Company has 193K Facebook followers & 37K Twitter followers but Honest Toddler has 113K Facebook followers & 221K Twitter followers.  Also keep in mind the demographic both of these companies play to is THE SAME (aka parents especially moms with wallets).  All the writer of Honest Toddler had to do was write a 3-4 sentence update on her Facebook page explaining what Honest Company had said.  *BOOM*  Like kicking a bees' nest, outraged fans swarmed the Honest Company's Facebook site and started calling them out on their bullying tactics and really sticking it to them by swearing they'd never buy Honest Company diapers or products again.  And that got their attention.

The content of the outraged comments ranged from shaming to out-and-out insults of the products or Ms. Alba herself.  I've seen these kind of angry mob convergence before with The Oatmeal vs. the lawyer.  It's awesome that individuals or small operations who have loyal fan bases can overcome corporate jackassery and threats with the power of individuals who wish to defend them but it's also rather scary how fast it moves on the Internet and what collateral damage can be done. In some cases, reputations are ruined, privacy violated and safety threatened not to mention commerce lost.

I don't think it took more than 30 minutes until the original alerting message on Honest Toddler's FB page disappeared and was replaced by one that said Honest Company had called her and was working out the "misunderstanding."  Ultimately they backed away from that cease and desist idea as fast as they could and then decided to make amends to the Honest Toddler legion by offering a contest to win a whole year of diapers.  Disaster averted, right?  Probably not, the damage was done if the messages on the Honest Company FB page are to be believed.  That's sad but more stupid.  Whomever thought going after Honest Toddler like that was a good idea was really kidding themselves.  Take that as a lesson of Internet Justice.

Can the fans of Honest Toddler be bought?  Can grievances be redacted?  Can lawyers learn from their mistakes?  Stay tuned.
at 4:40 PM No comments: