I just finished listening to a recent This American Life podcast about Penn State and it's status as the #1 Party School in America (Princeton Review). It chronicles the rather large problem of excessive binge drinking and all the delightful behavior that comes with it. ("Excessive binge drinking"--is that redundant?) Anyway having attended what most people consider a party school (WSU), I recognized the scenarios in the story (drunk kids peeing on lawns of local townspeople), student "types" (obnoxious drunk girls & spaced out guys) and the tragedies (a student falls to their death or dies of alcohol poisoning).
Drinking and college go hand in hand--there's no way around it and I won't deny that I had a great time. Maybe I was lucky or smart or a little of both but nothing regrettable happened in my college experience where alcohol & partying were concerned. I knew I was there to learn & work toward a career so the social aspect was a benefit not a requirement. But I developed a partying strategy to successfully navigate the scene:
1) Act more drunk than you actually are. This was not difficult for me due to the Asian Flush. Within one drink, my cheeks would be lit up like a Christmas tree. Still, you can maintain control and have a good time.
2) Leave before the downturn. There is always a point in a party/gathering where the fun climaxes and then everything/everybody gets ugly. Leave before then and keep your happy memories.
3) Have backup. Especially as a gal, it's unwise to go alone to a frat house or a party where you don't really know the people very well. Also avoid walking around late at night on a college campus by yourself.
4) Know your limit/pace yourself. Why do you need to do 5 shots in 5 minutes? What is the point of that? Do college kids think that despite a virtually endless supply of alcohol available in a college town that they might be capable of drinking it all? I never understood that.
I guess I'm feeling sort of apprehensive about this now that I have a kid and I'm squirreling away money for her college education. All of a sudden this isn't all fun and games anymore, college students can get seriously messed up or dead from binge drinking or activities stemming from it. I would not want to deny her some raucously awesome magical nights in her future but it sure looks different from this side of the table now. And yes, I know I have a while before I need to seriously think about this but it's never too late to save so never too late to worry.
at 10:26 PM No comments:

When Mommy and Daddy got to go out for a holiday party, sometimes the end result isn't half bad.

The Magic of Christmas...and Photoshop

As I reported earlier this month, we joyfully welcomed the newest Testa (Prince Maxfield) into the world. But we are pleased to announce here that two other couples we love & adore are expecting babies in 2010: 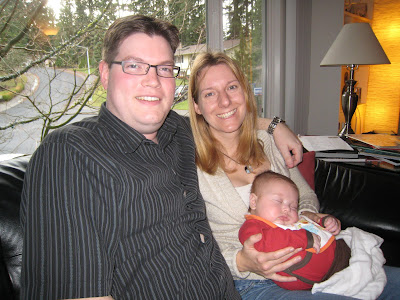 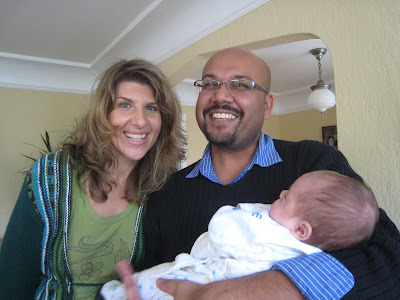 We're letting them practice with Sidney.
at 5:44 PM 1 comment:

Besides talking about our children all night, we (along with Ken's coworkers) tapped into our inner rock star. Now I do that already between playing Rock Band and singing karaoke here at the house but it is so much fun to do with others. Here is "our band" singing I Love Rock & Roll. Good times. (Click to enlarge)

Overall, the event was wonderful with good food, drink, activities and a cover band that played ALL 80'S MUSIC (Right on). They even busted out "Enjoy the Silence" by Depeche Mode so I cut it up on the dance floor. But let me just say, this girl doesn't do high heels any more. I can't take it. No wonder fashion models are so bitchy, they're hungry but more importantly, their feet hurt. Party's over when the dogs start barking.
at 10:48 PM No comments:

UPDATE: Serendipitously, I got to see the Testas today when I was at Ballard Swedish for my Mom's Group! They had just been discharged when I was getting out of my meeting. Little Maxfield is so precious and looks just like his daddy. He is 7 lbs 9 oz and just as sweet as can be. Sidney was in her stroller next to him and I couldn't get over how much bigger she is. At 15lbs, she is double his size but it's incredible to realize how much babies grow in such a relatively short time. Shannon told me her harrowing birth story of 36 hours of labor that ended in a C-section, but she looked amazing for having experienced that. So exciting!

A whole-hearted welcome to Maxfield Kenneth Testa who arrived Monday 12/7/09 to two of the coolest people on the planet who are going to be awesome parents. I don't know too much about Maxfield yet but from the look of him, he's going to give this world a run for it's money. Congratulations Sean & Shannon!!!!

I've been Sidney's mom for about 13 weeks now. Sometimes I can't believe it. Last night I was in the bathroom brushing my teeth and thinking, 'there's a baby in the other room and she's mine.' Even at 35, I find myself wondering if I'm "qualified" to be some one's mom; but then I think, yeah and it's about damn time.

Truthfully, our first weeks after bringing Sidney home from the hospital were really tough and I struggled to keep it together. I've already talked about the breastfeeding ordeal which had a lot to do with that, but the hormonal fluctuation and the sleep deprivation were also intense. (This is expected for new moms and not what is considered post-partum depression. That is much more severe and you usually can't lift out of it like I was eventually able to do.) But at week two, I commented on Facebook that I couldn't believe it had only been a few weeks with Sidney and that it felt like much longer. My co-worker Dave said it was because I was awake for so much of it.

I like to pride myself in being pretty steady and level emotionally. I also like to think of myself as rational and thoughtful. But my god in the first weeks, I didn't recognize myself. I would start crying when I thought about my mom having return to Portland, when I would see puppies in commercials or when veering into territory regarding my feelings about ANYTHING. And unlike college all-nighters, the consecutive nights of sleep deprivation with a baby make you delirious or at least chronically absent-minded. I couldn't remember anything and there are lots of appointments in the first weeks--and especially with Sidney's jaundice, we had people coming and going here at the house. I could take nothing for granted so everything had to be written down or the information would evaporate into the ether.

I realized too that I had to give it all (emotionally, physically, mentally, intellectually) to fulfill her every need. Her fragility and dependence weighed so heavily--I thought then it might be more than I could bear. But I remembered something my co-worker Craig said a few years ago to me: "Having kids is like cutting out a piece of your heart and putting it out in the world. You have no control over it and it can get hurt." I guess as a parent you are always trying to balance protecting your child versus preparing them to deal with harsh realities of life. It's like you're slowly letting the rope out. When you're a kid, all you want to do it push the limits and as a parent all you want to do is protect that little being as long as possible. (I'm sure toddler-hood will be fun.)

I no longer feel the level of anxiety I had at the beginning where I felt constantly unsure of myself. But I can see why some parents can seem over-bearing and over-protective. That trap of wanting to do everything right and what the books say can make you crazy. Instincts (as muted and suppressed in our hi-tech world as they are) count for something.

No one really told me any of this or maybe as a non-parent you can't quite grasp the intensity. The only frame of reference you have is being someone's kid and it's hard to appreciate all that parents do from that perspective. Personally all of the effort we put into getting pregnant, staying pregnant, eating right, not learning how to deliver vaginally and taking all the classes, still left the "after the baby arrives" part a little abstract. Once I gave birth I actually thought: Whew, that's over. Now I can relax. (Cue hysterical laughter.)
at 9:30 AM No comments: