To Pet or Not To Pet

The kids have been pestering us for the last few years to get a pet.

Pets are great for kids in theory. I grew up with pets myself: dogs, cats, a few short-term fish. But we lived in the country and our dogs and cats were outdoor dwellers mostly. They had barns for shelter and acres to roam. Growing up with them fostered empathy, maternal instincts, consideration for other beings and provided companionship/friendship when human beings were disappointing--and in adolescence/teenhood, people are plenty disappointing. So yes, I totally want this nurturing, instructive and commonly shared experience for my children.

When Ken and I were first married, he brought Oliver the Tuxedo Cat into our new family unit. He (Oliver) certainly wasn't the sharpest tool in the shed but was so regal and handsome. An added bonus is that he'd already been house-trained and was just the right amount of effort for two working professionals with no kids or other major distractions. 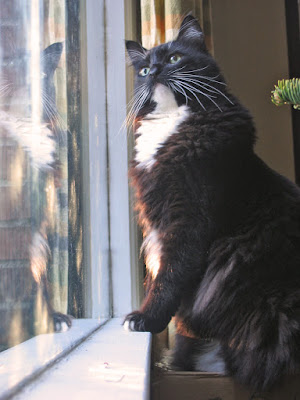 Oliver surprised us when Sid came along in how gentle and interested he was in the new baby. He acted as a good 'fur brother' to Sid and it delighted me that she had him around for her first three years.
One month after Cal was born though, Oliver died from what the vet surmised was a blood clot and stroke. He was twelve. Sad, yes. But in all honesty, Oliver received so little attention at that point with a toddler and a newborn in the house, I didn't even have one more ounce of energy to give. Alas he did live his best life up to that point watching the birds & squirrels and staring vacantly into the middle distance just like good British period drama actors do.

The kids have come through to school-age now alive, well and semi-independent.  We have a few more cycles of energy to spare and between you and me, I wouldn't mind having another cat... someday.

The kids really want a dog. 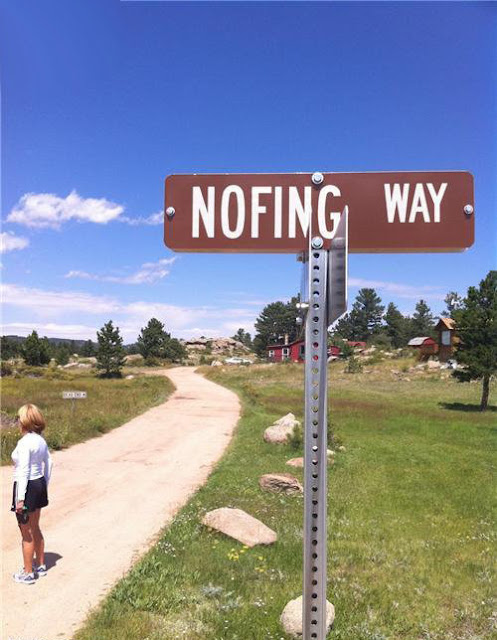 People, I've handled my lifetime share of poop. I simply shudder at the thought of a creature who will ALWAYS require poop handling. I am just now finally NOT having to manage other people's excrement anymore and after eight years of that shiz (literally), I'm done. Also I can't live in close quarters with another clingy, mess-making, possibly furniture-destroying creature. I've already got two of those. And let's be REAL honest here, even if the kids swear they will take care of *everything* who really ends up taking care of the pets and tracking all of their nonsense?

(Imagine there is a mirror here)

At our current neighborhood home in Seattle, we have a lot less room, a busy road directly to the north of the house and a more hectic lifestyle than we did in rural Ridgefield. I know many of our neighbors manage having dogs but that's not the point. 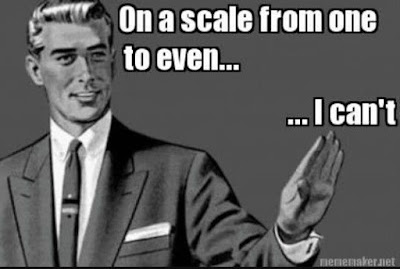 But since we're easing our way back into the pet game, someone suggested fish. I'm a little bit familiar with fish. I had two when I was about 10 years old and managed to keep them alive for some months in a glass bowl filled with pink rocks and a bubbling treasure chest. How hard could this be?

Mind you, this is supposed to be for the kids to do and take responsibility for. Ever since late last year, Sid (and Cal to some extent) have been insisting that they will take care of and pay for getting a fish tank.

But have you heard of the Nitrogen cycle or New Tank Syndrome before? Hmm, me neither.

Evidently there is a biological freshwater ecosystem that has to be established over the span of 30 days for tank survival involving the 'circle of freshwater aquatic life' including ammonia, nitrite, nitrate, algae, $20 worth of water additives, an aquarium heater, water test strips and, absolutely under no circumstances, putting any more than a pinch of food in the tank every other day. This is just for the water to be correct--you also need a tank, decor and of course fish with the WILL to survive.

Behold the five gallon tank of destiny, artfully decorated to make sure our White Cloud Tetras love it. 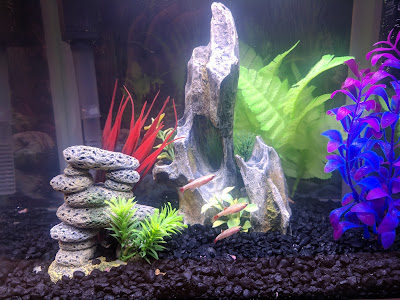 For those keeping track, we got three fish initially after 24 hours of conditioning (demineralizing) and stabilized the temperature of the tank (76 degrees) but you know what we didn't do? There was no helpful bacteria in the tank to kick off the aforementioned nitrogen cycle so the fish looked sickly within hours of swimming around.

About 5 hours later we had our first casualty. [RIP Fish #1.] The other two also looked bad so I assumed they would soon join their comrade in the fish afterlife or void of nothingness. [Are fish Atheist?]
In the midst of explaining this early loss to the children who were concerned and wondering if all the fish were doomed, we went back to PetCo. This time we picked up some SafeStart Bacteria juice that would get the aquarium well on it's way into the Nitrogen cycle and give the fish a more familiar environment to the one at the store tank. 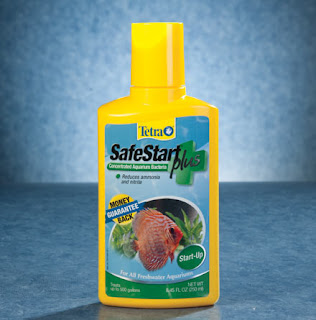 WHY ISN'T THIS STANDARD ISSUE WITH A NEW TANK?

I also picked up two more fish since I ASSUMED the other two would be dead by the time we got home. We had left them resting on the rocks after all, losing color and barely moving.

And yet, we came home and they were still hanging on. I added the above SafeStart Bacteria juice (1/2 the bottle) because the directions are worthless and the Internet says you can't oversaturate this bacteria so 'just go for it'. Within a few hours the two old fish and the two new fish were perky as ever, darting around in the mid-tank areas. The water has been a little cloudy but not too bad.

Today, three of the fish are like a mean girl clique swimming around and judging everything and the other one is always hiding in the corner writing comicbook movie fanfic or plotting revenge. Hard to say which.

The last 48 hours of my life have largely been spent worrying about this blasted aquarium that I did not ask for and the detailed knowledge of the Nitrogen cycle has supplanted fun memories of my early 20's that I will never get back.

So we're going to get the tank through the 30 day cycle, I'm going to set up a feeding and cleaning schedule and then we shall see how the children rise to the occasion or not. 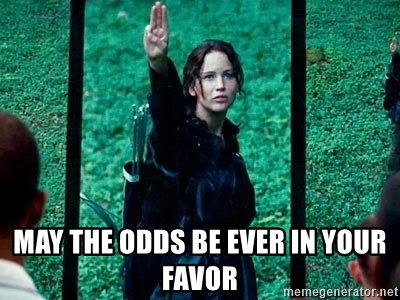