Prior to Sidney's arrival, Ken and I already had a ravenous, excreting, 11-pound bundle of joy named Oliver. Anyone who's been here can tell you he's a little bit off. Not mean or spasmodic but sort of compulsive and distant. He has dealt with the new addition to the family by eating alot and acting slightly more friendly to us & visitors since he gets so little interaction from us now. But he never was a very affectionate cat to be begin with so it's hard to know how much his life has really changed. 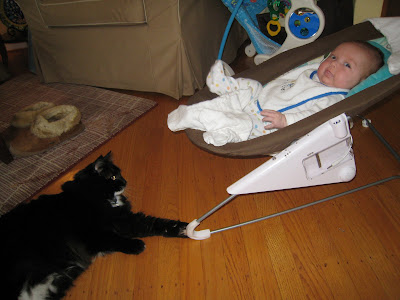 He usually regards Sidney as a strange, noisy object to be avoided or ignored. 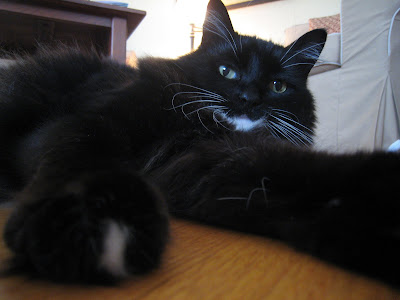 He's only sitting here because I am dangling the end of my robe tie for him to play with. 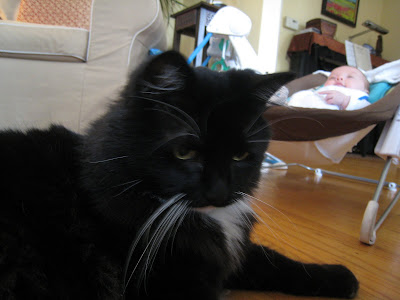 It doesn't appear that Sidney really knows what to think of Oliver but one day that tail is going to be quite grab-worthy. 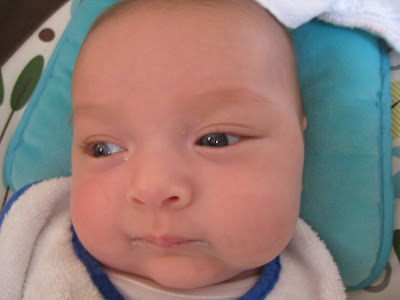 We want to wish our Bay Area friends Josh & Clover (who share the same wedding anniversary with us) a hearty congratulations on the birth of their daughter, Sierra. She was born today (11/11) so she & Sid can start an exclusive club for partially Asian girls whose dads used to work at RealNetworks and birthdays are the same month and day number.
at 7:26 PM No comments:

A hearty CONGRATULATIONS to my cousin Angela and her main squeeze Jamie on their recent engagement. Two finer people you could not meet. We are so happy for them and look forward to wedding planning!

We all live on a...Spanish Galleon

Ever since Ms. Sidney came into our lives, Ken and I have made a growing discovery that we live aboard a 17th century sailing ship that creaks like the dickens. We had no idea how squeaky our floors were until walking around in the wee-hours of the night to get to the baby's room, get to the kitchen to warm bottles or go to the bathroom--all without disturbing our newest family member. And for those of you who have been to the house, we're not talking alot of distance. Ken thought he might get out some painter's tape and put marks on the floor where the squeaks are so we could avoid them but then he might as well just put a big X across the whole thing. There is nothing that can be done for us unfortunately. You can fix squeaks in a wood floor by drilling screws or nailing the floor boards up from the bottom but you need an unfinished basement to do that and we don't have one of those.
at 8:43 AM 1 comment: