More often than not when we make our annual East Coast journey, there is a blue crab feast with one or the other sides of Ken's family. This year we congregated in Ocean City, MD (also the location of our one date night away from the spawn) at the home of Ken's cousin Alan. This represented Ken's mother's side of the family.  Alan's mother, girlfriend and sister also helped make the meal a success. 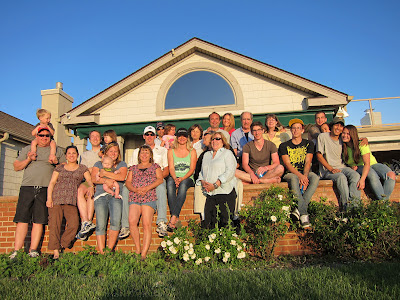 Lots of small children were in attendance too so Sidney was right at home.

It was at a beautiful abode situated right on the bay. The weather was perfect and the food was plentiful.


I strategically sat near my father-in-law Duke who is a master at "crab picking" or cutting away all the other garbage to get to the small amount of meat inside the crab body.  That is still such a weird thing to get used to after being on the West Coast and eating the plentiful leg meat of Dungeness and King Crab.  The Blue crab are tiny and take a lot of effort to extract the small amount of meat they possess.  That is usually why I eat something else like a burger or hot dog or something.  I tried once when Ken and I were first dating to properly "pick" a crab by myself but it felt so surgical and when I finally got to the meat, I was so grossed out by it that I barely wanted to eat it.

Cousin Thomas made a special trip down from NY where he recently graduated from drama school  to hang with the family.  We were delighted to see him as well as all the other family.  Sidney definitely had a blast though didn't eat much.  Well she ate a lot of fruit.

A great time in a great place with great people!
at 11:28 PM