During our annual visit to the East Coast to see friends and family, Ken arranged for an unusual field trip to something he and Sidney had found on the Internet.  Very often when reading books or talking about things, Ken and Sidney will look up videos online to further give context or explain something that Sidney has never seen before.  Often this is something we do for wild animals so she can see what they are like in motion.  But sometimes the two of them will go off on tangents and look at things like ballet, gymnastics, parcor, birth videos and so forth.

One of their tangents led them to change ringing which is the English art of ringing a set of tuned bells usually found in church towers that requires one ringer per bell.  It originated in the 17th century and it's what you might associate with traditional Old World church pageantry but probably you've heard it during the telecasts preceding the ceremonies when Royals get married or die.

Despite that, there are a surprising number of places in the US that have these bell towers including the University of Washington but alas they are not open to visitors.   However at St. Andrew's Episcopal Church about 45 miles north of where Ken's folks live in a town called Princess Anne, Maryland they were welcoming so we headed up there Wednesday night.

I had not been privy to seeing the videos of the change ringing so I had no idea what was in store. 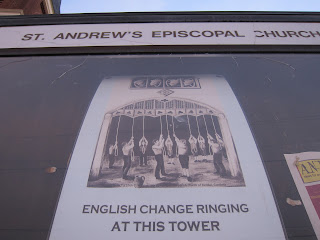 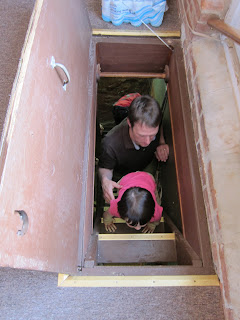 First we had to climb up ladder-like stairs into the tower.  Poor Ken had a pregnant wife and a toddler daughter to watch out for. 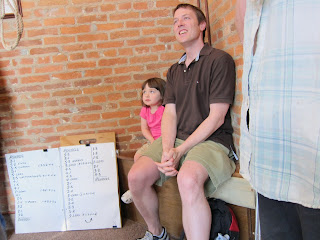 The tower is naturally close quarters so we had to push ourselves into a corner to be out of the way. 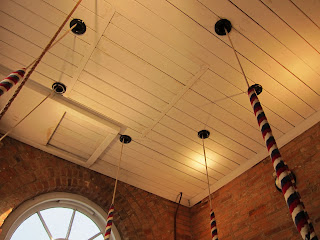 The bells hang in a way that laymen would consider "upside down" above our heads while the ropes that rang them came down through reinforced holes in the ceiling. 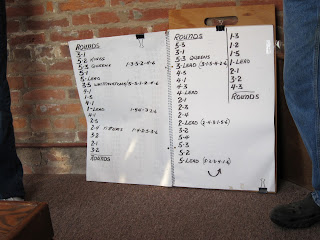 They don't use written music but instead have patterns for each of the numbered bells.  In this case they have bells 1-5. 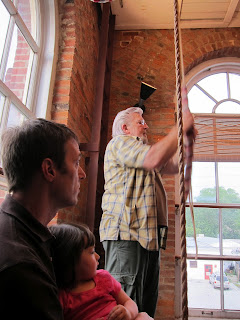 Carroll Lentz is the leader of this group on Bell 1.  He calls out what they are doing and changes during the piece. 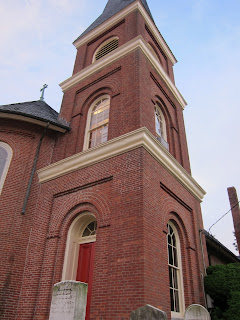 Here is what the tower looks like from the outside.

And this is what it sounds like on the inside...
Thank you to our gracious hosts who let us intrude on their Wednesday night practice, answered all our questions and played some beautiful music for us.  The first moment the bells started ringing brought tears to my eyes as the live sound to the ear has a richness that is almost indescribable.  It's on par with hearing a symphony live too.  A truly unique experience.