Giving up the Prius Smug 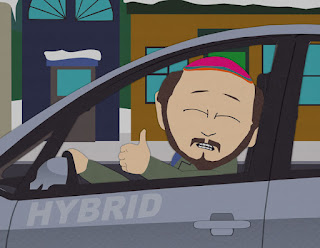 
Back in 2005, Ken and I purchased a new Prius because the Volvo I had been driving since high school had clicked over 222,000 and spending $1000 every year on maintenance was not fun.  We were getting married that year and wanted a reliable car we both could use since Ken only had a motorcycle.  We also wanted to support the efforts of car companies who were trying to do better things for fuel efficiency and so we purchased the conspicuous Toyota Prius.  I won't lie when I say there was some bit of pride and smugness in the first years (especially when there weren't too many on the road) when people would take notice of the car in parking lots or other Prius drivers would give a thumbs up at a stop light.  Not unlike the South Park episode hilarity.

But I certainly wouldn't call it the most comfortable or highest quality car.  The money is in the drive train and the technology that optimizes the gas milage.   As time has worn on, little squeaks, rattles and shortcomings have made themselves known.  But the car suited all our needs even as we transitioned into a 1-kid family.  But as we are poised to add another to our brood, there is no way that the car could accomodate.  First off, Ken can't sit in front of a car seat because of his height.  All this time we've had Sidney perched in the middle of the backseat and in the days of the rear-facing infant bucket, Ken & Sidney's seats would sort of pass each other in the middle.  It was funny.  Also when we traveled to Portland, we'd have gear and luggage piled up on each side of her as well as filling the trunk area.  I lamented if only Toyota would only make a larger Prius, we'd be set.

But Toyota did just release a larger Prius in the form of the Prius V wagon.  Knowing that we'd have some extra funds from the house sale this spring, we decided that we'd get a new car.  Both of us desperately hoped it would be the Prius V since we had been more or less satisfied with our regular Prius and had grown addicted to the insane gas mileage.  We were also considering the Honda CR-V, Toyota RAV4, VW Jetta Sportwagen & Mazda5.  So a wagon or a (shudder) compact SUV.  Our criteria was simple: two carseats fit in backseat, a 6-foot driver/passenger can comfortably ride and room for gear.  Bluetooth, back-up camera and durable interior--all a plus.

It was the Prius V's deal to lose basically.  We looked at the Honda CR-V first and there was nothing bad about that car.  It had decent okay gas mileage for it's class but not as good as you know what.  It was a good price and the salesman did not annoy me.  But it was the first thing we looked at so  we needed more comparison.  We were supposed to look at the Mazda but it's reliability ranking was subpar compared to the others so Ken wanted to drop it.   As for the VW, well, I've never owned a German car but my brother who is intimately familiar with them mentioned that once they start going into the shop like the Volvos do, it gets 'spensive.  We just wanted to see as soon as possible if the Prius V would be the answer to all our hopes and dreams so we moved our appointment at Lake City Toyota up from Sunday to Saturday late morning.

Our change of schedule resulted in not being able to meet with the salesman who was officially designated to deal with Internet inquiries.  Instead he pawned us off on some guy in a pressed shirt who knew nothing about the Toyota cars.  It was jaw-droppingly bad.  We'd ask him what the difference was between the 4 types of trims on the Prius V and he couldn't do it.  Didn't know anything.  Not to mention that he sauntered back and forth to the lot to bring the car up.  Like a stroll in the park.  Hey sir, do you notice that we have a 2-year-old with us?  Time-is-a-ticking.  For these car inspections, we had Sidney's car seat, the new infant car seat and a large stroller to see what the car could accomodate.  I kid you not, as we're trying to get the car seats in the V, "pressed shirt" says to me, "So where is the other baby?"  "Um...in my belly," I say pointing.  (I'm 5+ months pregnant and obviously so.)  I hoped he was joking but he was not.  Realizing that I'm probably the rare woman who is angry because someone mistook me for NOT being pregnant, aren't car salesmen supposed to be masters of psychology and observation?  Didn't bode well.  I told Ken that if we decide on the Prius V, we were not buying it at Lake City.

In a nutshell, the V is bigger, but not by much.  We could have made it work but it still would have been cramped.  The kicker was the quality of the interior.  It felt so cheap--like a plastic toy.  The seats were super thin and I just kept wondering what condition this car would be in after two young kids had their way with it.  I just wasn't impressed and for $4K more than the CRV which looked considerably nicer with more room, I began to feel the pull of not sacrificing comfort so much.  Ken did the math to see how long it would take to make up the $4K difference in gas mileage efficiency and he came to the conclusion that it would be 7-8 years to net out.  We would likely not even own the car that long. And suddenly the smug began to dissipate.

Toyota is ranked at the very bottom for customer relations. I've had nothing but offsetting encounters myself - and so I haven't bought their vehicles. I think your Honda is a good choice.