There is a lot that goes into Christmas as a parent.  It takes mental preparation and dedication to gear up for all of it.  There's the decorating, shopping, parties/events, holiday cards, baking, cooking and explaining what it all means.

We've punted on the last two Christmases of our daughter's life.  For the first one, she was only three months old and we were just coming out of the sleep deprivation haze.  I didn't have any energy to decorate or get Christmas crazy.  Lucky for us, we spent Christmas in the Portland area and my mother had an especially lovely tree and decorated house.  For the second one, we made the genius decision to move two days after Christmas.  (Take a look at our faces in this post--that about sums it up.)  So there was NO way I was staging Christmas decorations in the middle of that.  But my mother again had a lovely decorated tree & house.  So for a few days we forgot about the chaos that awaited us in Seattle. This year, it's time to get in the swing of things...

Sidney is taking in all the "Christmafied" environs this year when we go out and about. So I broke out 1/8 of my Christmas decorations and put them around the house.  I only used 1/8th because the majority are *indoor* Christmas tree ornaments.  In our new house, we have a lovely noble fir just growing in the middle of our backyard.  I figured, instead of cutting down a tree and paying $75 for something we will throw out in a month, we should just decorate the outside tree.  So we did. 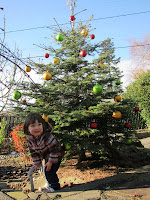 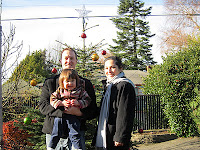 Christmas means a lot of things but it tends to come down into two major camps: religious (Jesus) or secular (Santa).  Could two concepts be more different?  Up until now we haven't had to worry about what to tell Sidney about Jesus and Santa.  Being a nonreligious household, we don't feel really qualified to explain the Jesus part.  Perhaps we will get a short kids book on it just so she understands the significance.  Or maybe one of her former Catholic school-attending grandmothers can explain it.  To us, the spirit of Christmas season is giving, reflection, celebration and wintertime.  I still hope to install some aspect of active charity or community work but the best we can pull off right now is giving some money to the food banks. (I'm totally open to ideas if anyone has them, btw.)

But the concept of Santa is a tricky one.  Ken and I have mused about our own experiences growing up with the myth of Santa.  At first, it's wonderful and magical, and why wouldn't it be: there's a guy with flying reindeer and a sleigh who brings you presents and knows just what you want.  But eventually, someone tells you or you figure it out and have that crushing realization that Santa doesn't exist.  You then see it was a ruse by all the grown-ups you knew.  Santa might only be the first of many disappointments but it can certainly be the hardest.  I remember at five or six years old figuring it out but I wanted so badly to be wrong.  I used logic to wear my mother down until she finally admitted it.


"How is it possible for Santa to go to very single house in the world?"
"How does he know where everyone lives?"
"How does he have time to do all of it?"
"How does he get into people's houses who don't have chimneys/fireplaces?"
"I looked at our fireplace and he can't fit through it."

I was relentless with my questions and the exhaustion from dealing with my new little brother (and of course me) put her at a distinct disadvantage.  It was a valiant effort on her part to explain things and keep it going but she was ultimately no match for my singularly-focused barrage.  I get it though: from an adult perspective, it's all in good fun and you just try to continue the fantasy for the next generation.

So far, I've sheepishly addressed the concept of Santa and we've been reading the Night Before Christmas.  I'm sure we'll go to sit on his knee this year (I have a Groupon for the Alderwood Mall Santa pics).  I asked her tonight what she'd ask Santa for and she wants a "black candy cane."  Specific and eye-brow raising.  I believe she saw one of these flavored candy canes at the store so it's not too "Nightmare Before Christmas".  Not that she's even seen that movie.  Yet.

We'll see if she's okay with Santa--sort of as a dry run--because my uncle will be making an appearance as Santa on Christmas Eve.  He also did this when my cousin, brother and I were little kids.  Santa will likely give her just a few small gifts.  As discussed yesterday with a fellow mom, if Santa gets all the credit for the big, expensive gift, it's like this stranger she hardly knows gets all the glory.  We can't have that.  To Be Continued...
at 1:47 PM