Sidney's costume this year was a triumph in procurement. While my mother used to make many of our costumes and was amazing at turning fanciful ideas into reality, sewing is not my core competence. So I had to start early and be on the look out for ideas. I think by late spring early summer I bought Sidney's antennae headpiece. I loved it so much and built her entire costume around it. Next I found that little dress on the internet on clearance and it came with the lamest set of wings I've ever seen.  So I found another set of wings on the internet but when they arrived I realized they were for adults and too big & heavy for her.  Then a few weeks ago while trolling around in Target I happened into the costume section "just to see" and wouldn't you know it?  Perfect purple wings with the curly ends and everything.  Looks like the headpiece and wings are a set but they weren't.  Score!  The downside of those wings are those curled ends: they grab on everything so she has to have a 4 foot radius of open air. 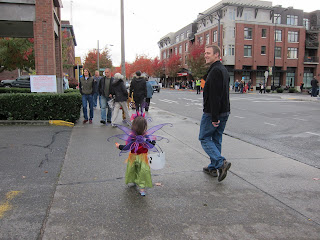 This Halloween we went up to Queen Anne to participate in their neighborhood trick-or-treat event.  I know, we don't even live there, it's scandalous!  But we were with our friends the Testas.  They joined us last year in Ballard for our neighborhood trick-or-treat event.  Up on Queen Anne at their neighborhood event where you go from store to store, it was pretty crowded and there were some kids who were 10-12 years old who were like velociraptors and as our little toddlers would approach a person with a bowl giving out candy, these kids would rush up in front of them nearly knocking them over and crowding them out.  Seriously, there's enough candy for all of you--take it easy.  In all honesty, Max & Sidney will not get to eat most of their bounty this year (that's what we're for) but at least they got the experience so they can sharpen their elbows for next Halloween. 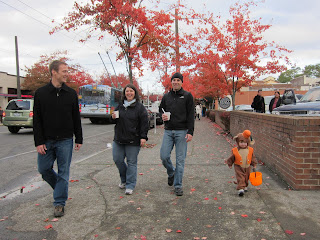 And on top of that a gal from one of the coffee shops had all the candy in a glass jar and was sitting outside the shop, holding it on her lap.  I passed her then I heard a loud crash and felt something hit the heel of my boot.  I looked back and saw the glass jar had shattered on the ground with candy scattered among the very sharp pieces.  (I'm still not sure what caused her to drop it.)  Ken and other adults helped pick up the chunks of glass as there were a lot.  Once that was done, "the velociraptors" moved in and started taking the candy that was still littered among the smaller glass fragments because no one could grab a broom fast enough.  But the gal working there was actually letting them take it.  This would be THE scenario where I would say checking for foreign objects in trick-or-treat bounty is a good idea.