I suppose it goes without saying that we all have dreams.  Those that are attainable, those that are not and those that can be approximated.  This would probably count as the last one.  I don't know if I was inspired by the video game 'Rock Band' or the TV show 'Glee' or the audacity of a hobbyist musician husband but I thought, "what the hell, I can be a lead singer."  I don't have the moves like Jagger at 18 weeks pregnant nor the showmanship (or the ego) of David Bowie but I like to sing me some karaoke and no one else wanted to sing so therein lay the opportunity.

Since we moved into this house at the turn of 2011, Ken has earmarked half of the unfinished laundry room as his music studio.  It was originally an uninspiring space, as he would say, but it allowed him to have some room to practice the Theremin and drums.  Unfortunately, the entire house was at the mercy of these sounds as well.  Oliver, our cat, must not have thought too kindly of it because he began to pee around the base of the Theremin and around the cords.  The instruments were then hastily put into storage and Ken was MOTIVATED.  He decided by mid-year that a music studio would be "built"-- one that was soundproof, inspiring and most importantly had a locking door.  It took awhile to get this project off the ground (finding contractors and audio specialists) and it took even longer to build since it began at Thanksgiving and went on until Martin Luther King Jr. Day.  Because that's always the best time to start a remodel/house project: when you have guests and holiday celebrations.  But I digress.

Ken sent photos and a message to his two former college band mates (Charly of Ohio & Dave of North Carolina) simply saying, "Build it and they will come."  And sure enough, a set list began to compile, tickets were bought and Ken began getting up at 5:30am each morning to practice.  This is what we were up to all last week.  We were just back from California and boom we were right into what I lovingly call "The Ballard Basement Band: Rock Star Experiment."  Since the guys have a deep-seeded love of Rush, the set list contained the most number of their tunes.  I insisted from the beginning to also pay tribute to the Black Keys Brothers album because it moved me so much and we ended up doing 3 of those songs too.  Radiohead, The Smiths, The Killers, old Genesis and Band of Horses also had a song or two represented. 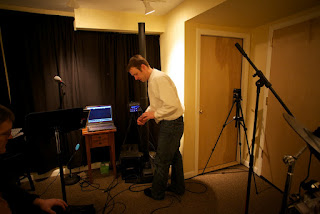 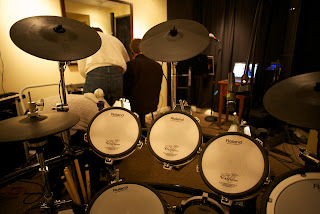 As the OCD-prone perfectionists they are, the guys took great pains to achieve sounds as authentic as possible.   As the only band member who is not musical nor musically trained, I couldn't figure out why this accuracy was so important and let's be realistic, this is just a bunch of people in the basement, playing covers.  We're not recording a record, we're not performing out, we're not trying to be the next breakout act on YouTube.  But this is where the process is just as important as the product.  That's what I learned from this experience after all was said and done.

Ken in his "spare time" (I say that ironically) wrote a program to compile MIDI patches for the drums & the 3 keyboards.  There were a lot of patches (sounds) for these songs too.  Radiohead has 5 musicians and our band only had 3 so the guys had to double up on instruments or have multiple banks of sounds to switch back and forth from.  In a number of the songs, Ken plays keyboards and drums simultaneously.  Where I was once convinced my husband couldn't multitask, I now know better. 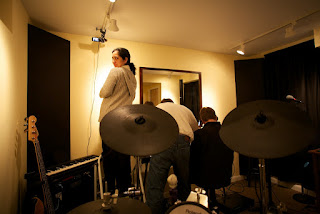 My contribution besides the passable vocals was to set up video recordings.  I tried to mount a camcorder to the track light which worked except that the video is upside down.  Not a problem really because I am told you can get editing software that will flip it.  I have not yet tried to do this yet but it will happen.  Because of the room configuration I had to run one camera on Dave, Charly and me and a separate one pointed just at Ken on drums and keyboards.  (This should be interesting to sync up.)  At this point because everyone has returned to their day jobs, there's only been time to do one trial mix down of one of the 12 or so songs we did.  Ken is using Garage Band to accomplish this and like everything else in this project, he's winging it.  But also like everything else on this project, perfection is the goal.  I am really hoping to get the final mix down of at least one song and edit video to it in the next week or so.

Stay tuned for part 2 in which I detail the wacky hijinks of the week itself.  It has everything: Sun Chips, needless trips to Everett, laptop surgery, using Theremins as collateral.  It's awesome.

(All these great photos were taken by Dave Purnell, the bassist and head banterer, by the way.)