Victoria BC Trip aka “48 hour abdication of all parental responsibilities,” Day 1 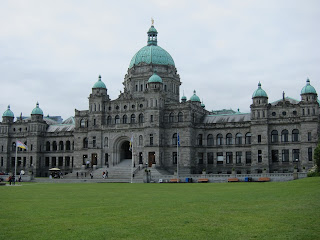 I’ll be honest, I was little nervous about my first overnight trip away from Sidney but it all soon evaporated when we left the house in the wee hours Friday morning to catch our boat.    Mother and Cindy were kind enough to come up from Portland and stay with Sidney for the weekend.  It was in honor of our 6th wedding anniversary that we officially celebrate later this month.  I “Grouponed” out and found deals on the Victoria Clipper and the amazing Marriott Victoria Inner Harbour which is right behind the famed Empress Hotel.
During the three hour mostly-smooth Clipper boat ride, we saw a Humpback Whale breach--that’s when I knew this would be no ordinary vacation.  With the freedom of movement and the ability to do anything we wanted, this trip suddenly became the gateway to a magical world called Canada.  The weather in Victoria is basically just like Seattle and luckily it was partly sunny and in the 50/60’s which as far as I’m concerned is perfect.  Ken definitely wishes it was hotter and definitely wishes he brought a better coat. 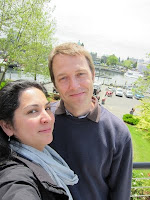 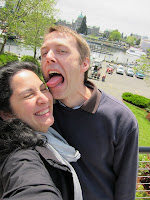 If I may make a sweeping generalization, Canadians have to be the nicest people in the Northern Hemisphere if not the world.  There are so many positive interactions we have had, they even drive “nice.”  But we are on Vancouver Island in Victoria so maybe it’s particular to this specific area but I get the feeling Canadians are pretty chill and why wouldn’t they be?  They all have healthcare.  Anyway, our room which was a “Groupon coup d'état” scored us a killer deal on a high floor room which overlooks the harbor and access to the coveted concierge lounge (free food).  Since Sidney, extravagance has been kept to a minimum so this is a big deal. 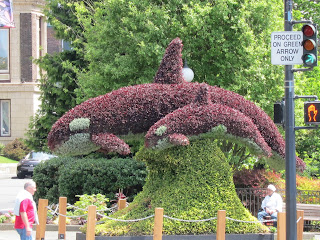 We found out there was going to be the first ever Freeride Mountain Bikers Jumping Event this weekend and watched ramps constructed as we ate some delicious fish and chips for lunch at the Flying Otter on the Wharf.  “Flying otter” is what they call seaplanes.

We decided that we needed to go see the Butchart Gardens right then and wanted to have the most flexibility with the least cost. Public transit would take almost 2 hours each way--nope, chartered motor coach had such limited hours of service--nope, renting a car was too easy--eye roll.   I know!  Let’s rent a motorcycle, no even better, a motor SCOOTER because (as in holding with one of the core tenants of our trip) it’s more economical.  (Fun fact: Motor scooters with 2 people on them hit a top speed of about 40 mph so don’t get on a highway/freeway with them.) 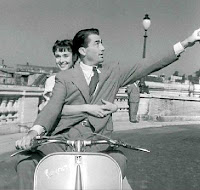 We  “Roman Holiday-ed” up to the Garden and took a picturesque but in hindsight ridiculous tootle along windy roads and much faster traffic.  The gate staff at the Gardens kindly held their giggles to a minimum when we pulled up to the park entrance to pay.  And then the scooter wouldn't start for a bit so we were almost freaking out that we’d have to call the scooter rental place to come pick us up--but alas it started up again.
A bit windblown and saddle sore, we strolled through the magnificent gardens.  And this comes from a person who doesn’t much care about gardening or yards or flowers.  This place is absolutely breathtaking.  According to one of the onsite staff, 50-75 full time gardeners are constantly working year-round.  It’s varying terrain and garden types are surprising and magical. 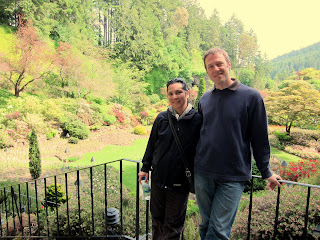 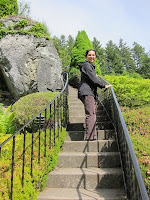 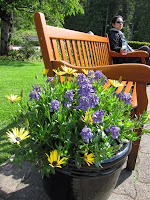 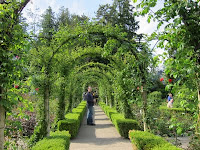 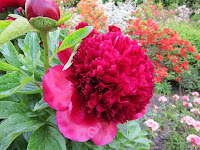 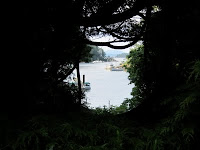 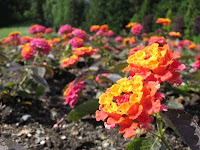 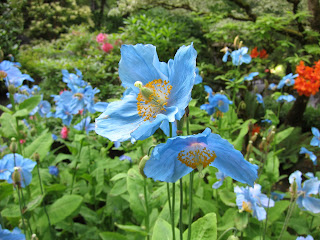 They even have a replica of Porcellino the bronze Florentine boar whose nose you rub for good luck.  Ken and I did this in Florence in 2004 when we visited and evidently the Butchart family had a replica made and installed in their garden.  Many of the flowers were in bloom so it was very colorful.  Unfortunately none of the roses were out---I guess that’s not until July.  But they have a rose garden that would teach Portland (the Rose City) a few tricks.  You can just tell that in full bloom that place must be stunning and so fragrant. 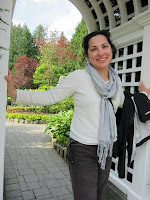 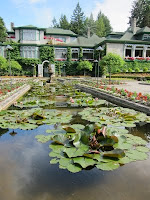 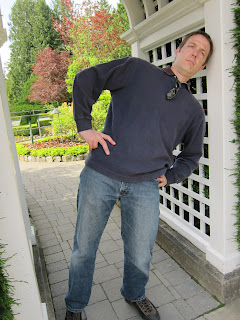 Reluctantly we got back on our scooter and braced ourselves for the many hills awaiting us.  For good measure we leaned forward when cresting.  The Marriott staff kept their giggles to a minimum as well as we arrived back and parked the scooter overnight in the garage.  About that time, Game 5 for the Stanley Cup had started between the Vancouver Canucks and the Boston Bruins.  It’s a best of 7 series and they were tied 2-2.  This game was being played in Vancouver.  All day we had seen people (including statues) wearing green, blue and white colored hockey jerseys (the same color palette as the Seahawks btw).  And you could tell people were psyched up.   But we caught the last half of the game and then went out to see how the Canadians celebrate winning a hockey game.  Crazy times! 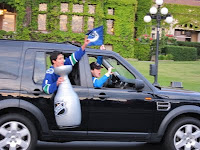 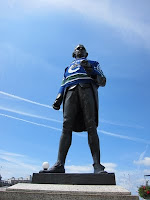 The next and possibly last game of the series if the Canucks win will be in Boston Monday.  We later asked a waitperson about what it was like when the Canadians played the Americans for Olympic gold.  It was crazy he said, people filled the downtown streets in Victoria.  But then he said, “But the Stanley Cup win is more important.”  #Canadian Culture Lesson

With a hopping nightlife and celebratory crowd mingling around the harbour and streets around the Empress Hotel, we took it all in until it became a bit crisp and I wanted to get a little bit more to eat.  Even though I had to wait 45 minutes for it due to a kitchen error, I had the best gourmet clam chowder I’ve ever eaten in the lounge at the Marriott Victoria.  Smoked paprika, yukon potatoes, cream, ham and clams.  Unbelievable.
So if you think this day was full of fun, wait until you hear about Day 2.
To be continued....
at 11:04 PM