Eddie Izzard: Lord of the Flies 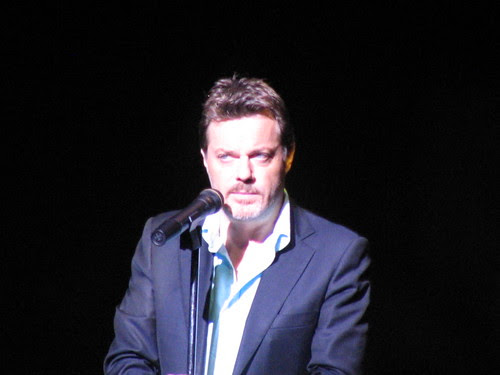 This photo was taken by Tara Omnes.

This picture was taken on Saturday at the Seattle Rep but that's pretty much what he looked like on Sunday too.
Eddie is one of my all-time favorite comedians and getting two hours and fifteen minutes of his non-stop observational musings last Sunday was a delight and privilege. But being in such an intimate venue at such close proximity to him is a responsibility that shouldn't be taken lightly.

Evidently, some hard core fans live around here and when they finally got to see Eddie Izzard at close range, the normally polite, restrained & well-mannered Seattle audience lost their f--king minds. Folks, you are not being helpful when you yell stuff out, just annoying and I certainly didn't pay to hear you talk behind me to your friend and laugh like a possessed tropical bird in heat. I found another blogger who said some things about the audience that sum it up, so I'm just going to quote him:

Fans...thrilled to see Eddie in the flesh...were prone to let loose a "Woooo!"--but Eddie demanded that they stop...that they interrupted "the flow" as Eddie called it. The audience, properly chastised (in a way that I've never seen a Seattle comedy audience controlled) participated in the rest of the show with concentrated laughter and applause...but no more "Wooo"-ing.

(Actually, there was one woman in the center--she couldn't seem to stop herself from affirming what Eddie was saying... It was like she kept saying "Yep!" Eddie didn't shut that down the way that he shut down the Woo-ers--but he mentioned it as an incredibly strange sound constantly coming from the middle of the room...a sound that the woman making it seemed impossible to control.)

Aside from that the show was excellent. He has plenty of material to tighten up into a fun & respectable touring program --because make no mistake, this was paid practice for him. I felt getting to sit that close and to see the show in a more raw form was refreshing. He covered new topics like Wikipedia, 300 the Movie, Hinduism and fly hunting. Whilst staying true to some familiar topics like Jam, Bees, Sharks, the Romans, Cows, Banjos, Monkeys, Noah's Ark, the Bible (pronounced BIB-lee), God & Jesus, speaking in a foreign language (in fact it was Latin-ish), guys named "Jeff" and the Queen.
But let's get one thing straight: during his encore while talking about "Fly-heaven" and a maniac fly from the audience appears to land on his suit jacket--that's a bit. Not just because it happened both nights but because it's conveniently ridiculous. Not only did the fly land perfectly on his breast pocket but when he flicked it off, it just sat there on the floor. He played the rest of the show to the fly which got big laughs. I'm not trying to be negative. Bravo, for getting everyone to sit up in their seat and re-engage at the final part of the show but for all the folks in the Blogosphere who think that was a miraculously random coincidence--just take some time to think that through.
***************************************************
Back in 2003, Amy & I went to his Sexie show @ The Moore. I even got to meet him and chat with him for a moment. I apologized for the abnormally warm Seattle evening that made being inside the non-AC endowed Moore theater less than ideal. (It just seemed like the right thing to say.) He had better legs than most women I know as he balanced on insanely high heels. He smiled, agreed then he signed my ticket.