Unicycle Diaries and other stuff

The end of December is a bit of a blur, as per usual.  But today I finally de-Christmasfied our house and it feels strangely good to officially start 2013.  As I was putting things away, I was thinking about the effort it takes to put all that stuff up and how in my childhood we used to hate to take decorations down because it meant another 11 month slog to the next Christmas.  Sidney seemed rather disappointed that the Christmas stuff wasn't permanent. 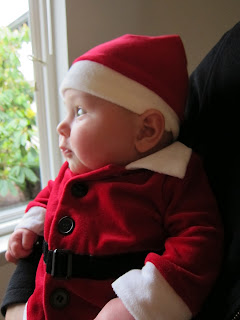 This year we did it a bit differently by staying in Seattle and not heading down to Portland.  I've only spent 3 Christmas Eves elsewhere: once in London, once in Virginia and this year.  So it's a big deal for me to break from the tradition I have done since I was born.  But I have to say it was nice to be in our own house and to try a few new things.  One of them was having Ken's brother, Ed, up for the holiday.  It was the first time he'd met Calvin and of course Sidney couldn't wait to hang out with Uncle Ed.  He was up last year to celebrate Thanksgiving and run the Seattle Half Marathon.  Another new experience was spending Christmas Eve with our good friends the Wallers + grandparents & the Atteberys.  Sarah & Mika made a lovely meal, we sang carols, read a Christmas story and Santa even stopped by. 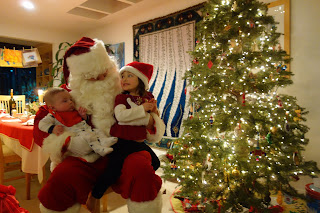 Christmas Night we braved the elements and walked through the Bellevue Botanical Garden that is way LIT UP for the holidays.  So cool. 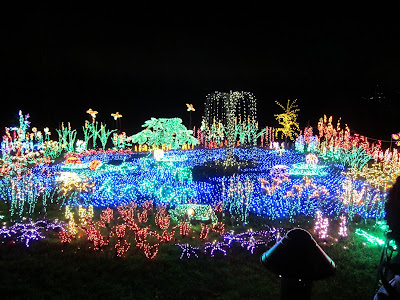 And finally what Christmas would be complete without some brotherly challenge and risk-taking?  In a throw-back to their youth, Ken and Ed bought each other unicycles for Christmas and promptly (as in hours after Ed landed) started practicing their unicycling skills so they can run off and join the circus someday.  (Or something like that.)   With Seattle's notorious weather, places to practice were a little harder to find but I'm told covered parking lots are the best practice areas.  I was just grateful that we had no trips to the emergency room.  Helmets, people! 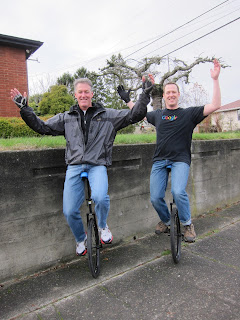 I'm looking forward to 2013 as kind of a blank slate.  I don't have a big agenda but I feel poised to be able to make something of it on all levels.  With the child-bearing behind me and my body being mine again, I really look forward to getting back in shape and moving around.  I also look forward to writing more and experiencing/reading/knowing more.  Lastly I am also hoping with some of the tragic and confounding events of 2012 behind us that this year will represent a turning point with thoughtful reflection, healing and positive action for this country, for this world.
at 4:34 PM