So last pregnancy update I mentioned how I'm starting to dilate and efface a little.  I was also told not to lift anything or take long walks or exert myself.  Those would be easy instructions to follow if I did not spend most of my waking hours chasing a toddler and running a household--but I do.  In my infinite wisdom, I folded a basket full of laundry the other day and instead of picking it up and "exerting myself" I decided to scoot it across the floor.  I swept it sideways with my leg instead of pushing it straight forward and wouldn't you know it?  I pulled a groin muscle.  Kind of an important thing to have working properly when pushing a tiny human out of ones body.  Delightful.

When I went in to the OB last Thursday, they simply advised hot-cold-hot treatment with ice packs and heating pads.  I had not progressed any more in the dilation/effacing department but as a matter of routine they took my blood pressure.   It was high and then they took it again several minutes later: high.  When I was pregnant with Sidney, in the 37th week, I had a blood pressure spike at an OB visit which was eyebrow raising but anomalous, then 5 days later I went into labor.  This time as a precaution, they took a blood draw to see if I had any signs of pre-eclampsia.  Luckily it was normal.  But they wanted me to buy a cuff and take my blood pressure twice a day then report back at my visit this Thursday.  Still, I cannot help but wonder if this was a sign of the end.

Since that visit, the Braxton Hicks "practice" contractions have kicked in with a vengeance.  I've even had contractions I've felt in my back which are supposed to be the "real" ones.  But none of these contractions are close enough together to warrant a call or run to the hospital.  They are just annoying.  Early this morning I had sharp pain in my ribs and sternum too.  I don't know what to think of that unless I have a baby alien in chest also.  We're at 35 almost 36 weeks and that's still earlier than one would want but it's become extremely hard to function.  I feel like sleeping during the day yet have lots of energy at night which is totally unfair to Sidney.  She's rolling with it but has had to play on her own a lot in the house or backyard because I can't do much.

I've already had to come to terms with the fact that I won't be going to my reunion.  The doctor said that the very fact that I'm starting to dilate means I don't get to travel.  I accept this but I am not going to be pleased if I have to endure weeks of these practice contractions on top of it.  The heat in Seattle has also kicked in.  Luckily we are holding in the 70's which is merciful compared to the rest of the country.  Still to a pregnant lady who runs hot anyway, slightly cooler temps would be welcome and slightly invigorating.  However, this week we are having a heat pump installed which was originally chosen to get us off of burning oil as a heat source but does have another awesome auxiliary benefit: air conditioning.

I really don't mean to sound all "complainy" since I know friends who have had much worse pregnancies and have endured so much more than me.  It just gets frustrating when things start to crop up like this while my energy plunges and my activity level become even more limited.  It becomes hard to keep perspective and not take it out on those closest to me, like my husband.  But it doesn't keep me from wishing sometimes that we were seahorses. 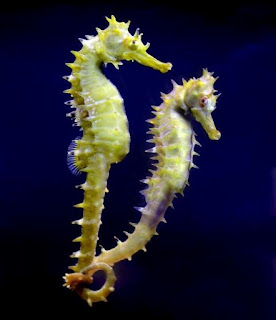