Last weekend my much beloved cousin, Angela, married her long-time love, Jamie, in a weekend getaway extravaganza.  The main event took place last Sunday at the base of Mt. Hood in Welches, Oregon at The Resort.

The Thursday night before, several of us in the wedding party took Angela out for dinner and a movie.  We of course saw "Bridesmaids."  I was secretly hoping we'd get a picture like this: 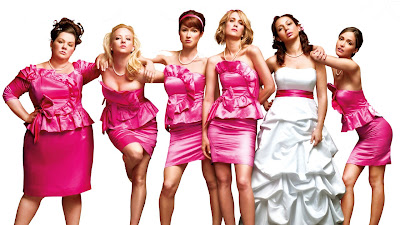 But I get ahead of myself.

Friday, the ladies of the bridal party partook in some pedicures/manicures and spray tans.  I was the only hold-out originally.  Not being wild about putting chemicals on my skin which is sensitive anyway, I thought my heritage would give me a little color.  Unfortunately the minute I saw the other girls, I realized I was the "tragically pale" bridesmaid.  So as my cousin cleverly predicted, I relented and bronzed up.

Afterwards, we had a celebratory lunch in honor of Angela's nuptials and we all tried to not to smudge our new skin color on anything. 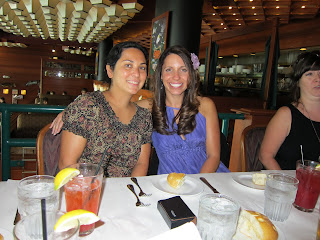 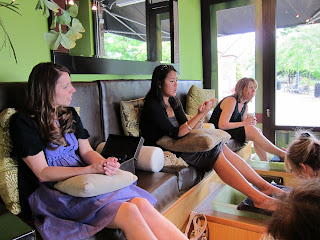 Saturday before the rehearsal dinner, Jamie and his guys golfed while Angela took the bridesmaids and some others (including Mr. Ken) up to Mirror Lake on a short, picturesque hike.  I'm not so much about the hiking and the outdoors but this was very nice.


Sunday we gathered early for make up and hair prep plus getting our beautiful bride ready.  A hair and makeup team assembled to get us all ready. 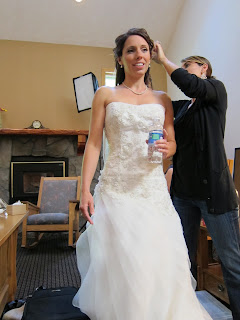 It also took a team of folks to wrangle, entertain, supervise and keep Sidney from getting dirty since I was singularly focused on being available to Angela.  Big thanks to Mom, Dad, Ann, Austin, Cindy and team captain Ken.


(As seen on Sidney's Page...)
On Sidney's part: the wedding was an amazing event filled with love, laughter, food (& drink) and the triumph of apple juice.  Miss Sidney was the flower girl and the plan was to have her hold hands with the ring bearer and walk down the aisle.  In rehearsal and before the real thing, Sidney wasn't having it.  So we found a compromise where she held my & the best man's hands, walked between us up the aisle and then went to sit with her Daddy in the front row.
Also on the actual day right before the ceremony, her energy began to wane and a meltdown was on the horizon but we gave her some straight apple juice (which she never gets to drink undiluted).  It worked like a charm.

I had managed to keep it together all morning and through the beginning of the ceremony.  When you are so focused on hitting the schedule correctly, being where you need to be, keeping yourself upright on heels and hoping everything falls into place, it is easy to forget that there might come a huge emotional swell when you have a moment of calm.  After Sidney and I got down the aisle and I turned to see Angela coming, this picture was taken then a minute later, I couldn't stop crying.  Waterproof mascara?  I was hoping that's what the makeup lady put on... Such a triumph of spirit and love on such a gorgeous day.  A monarch butterfly flitted over the crowd a few times and that being one of Angela's favorite symbols, those of us who noticed were even more reminded how special this all was.

Picture perfect and such a great match!


The ceremony was followed by a delicious brunch reception in the Ballroom.  I didn't eat much of it because I was so nervous about my speech.  Thankfully former-Toastmaster Mr. Ken worked with me on it for the week preceding so I felt some level of confidence.  The Best Man's toast was rumored to be a roast (paybacks are a bitch) but ended up being rewritten at the last minute into one of the most heart-felt, tear-inducing speeches I've ever heard at a wedding.  Since I was following him, I had to really compose myself before I walked up to give mine but it went well and, what's most important, Angela & Jamie liked it.

Team Sidney took turns watching over her in the room since the reception fell right in the middle of her nap.  Later, we got Sidney to dance a little and I brought my "B moves" (couldn't conjure the A moves that day) to the dance floor, cutting it up to Lady Gaga and the Black Eyed Peas.  The DJ looked like a cousin on my dad's side so he and dad kept calling each other "couz."  By 4pm, it was over and everyone involved was happy and exhausted (and in need of showers).   Mother and Cindy did us a solid and took Miss Sidney back to Portland for the night so we could have a nice evening up at the Resort with the folks staying behind including the bride and groom.  It was a marvelous event and weekend.  It's hard to believe it was only a week ago.

Welches on Dwellable
at 3:30 PM

Oh my gosh...gorgeous wedding. What a beautiful resort!

And I swear I know your cousin Angela. Is her maiden name Swerdlick? Did she or does she still live in Portland? I swear she looks just like a girl I worked with at Jay Jacobs way back in high school.

Indeed you do know her then. She did work there in HS.