With some Finnish cousins visiting, the Wallers put on a Spooktacular Halloween Celebration Saturday, complete with pumpkin carving, candy corn, kids in costume and a musical jam session with a Ukulele, Beatbox, Theremin and Keyboard.  Not to mention shakers and tambourines.  I didn't carve a pumpkin because I don't like getting my hands dirty nor do I have any great skill with knives and pumpkins.  But was kept busy by our little Shark girl who couldn't get enough of the Waller dogs and making herself right at home. 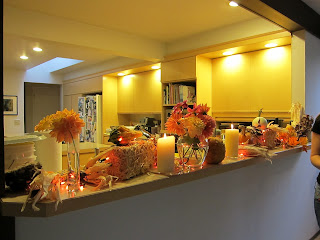 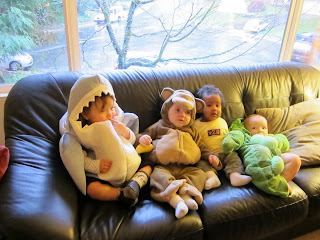 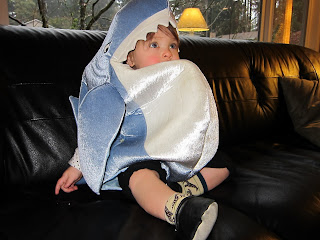 Friday, Ken was invited to a preschool that our friend Paul teaches at to demo his Theremin to the children. In the morning the children wore their costumes but in the afternoon everyone wore their pajamas. So we all followed suit. As you can see in the video at the end of the post, the kids thought it was pretty interesting but were a little reserved. Ken loved showing the Theremin to a new audience. Sarah is how we know Paul so Sarah and Andrew also attended the demo. Fun times! 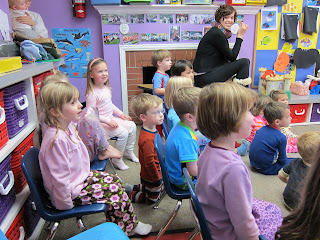 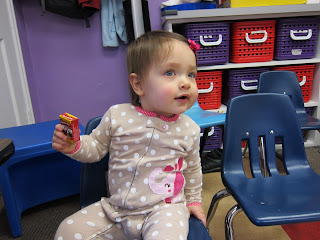 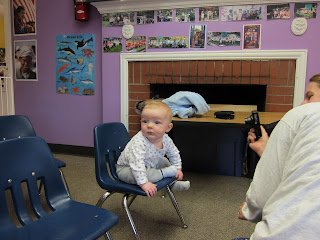 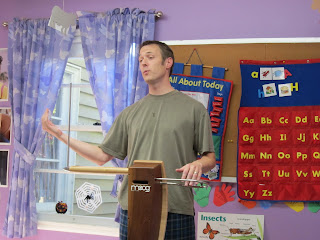 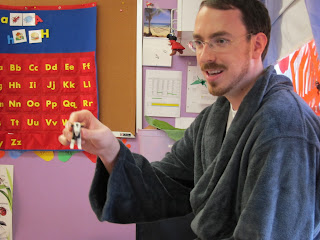 While visiting our friends in Wenatchee, we picked up a guest who stayed with us for a short while and will be moving on.  Allow me to introduce guest blogger, Flat Stanley.
Hello everybody.
This is my first blog post so I hope it goes okay.  I am with Ken, Kali and their daughter Sidney.  I first met Ken and Kali when they were visiting the Ronngrens in Wenatchee, WA (my previous host family).  We all went on a day trip together to Leavenworth, WA which is 30 miles from Wenatchee in the center of Washington State.  It is famous for being a "Little Bavarian" town which has yearly festivals and looks just like a town in the Alps in Europe.  When I visited, it was the last day of Oktoberfest which is a huge German holiday with lots of food, drink, music and celebration.  We stood in a long line to get a bratwurst (German hotdog) and I saw lots of happy people there.

We returned to Ken and Kali's home in Seattle, WA.  That is where the Space Needle, Mt. Rainer and Pike Place Market are.  But we have spent most of our time around their home in the Scandinavian-neighborhood of Ballard just north of downtown Seattle.  Seattle is the largest city in the Pacific Northwest and has the second most number of rainy days per year in the US at 154 days (first is Cleveland, OH).  And maybe because of that, Seattle is the #1 most literate city in the US--I guess everybody goes inside and reads when it's raining.
Their 1-year-old daughter Sidney is quite excited that I'm here and likes to grab at me when her mom holds me up.  She is a messy eater.
One day Kali took us to the pet food store and I got to look at the kitties.  They were very interested in me and tried to rip my arm off.  Kali fixed it with scotch tape.

We also visited the Hiram M. Chittenden Locks known as "The Ballard Locks."  It is a man-made mechanism that keeps the fresh water and saltwater separate.  It allows boats through by creating a sort of "water elevator" since the water level on the fresh side is ~20 feet above the salty sea level side. 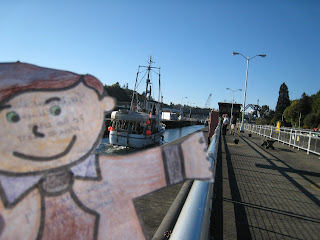 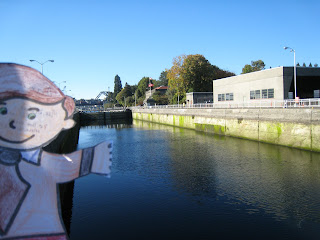 It also has a fish ladder that allows spawning salmon to come and go without problems.  There is a fantastic viewing area to see the salmon as they swim through.

Something else cool in Seattle is the Experience Music Project / Science Fiction Museum.  This past weekend a new exhibit opened about the show Battlestar Galactica so I went with Kali to see it.  I enjoyed looking at all the model ships they used in the show. 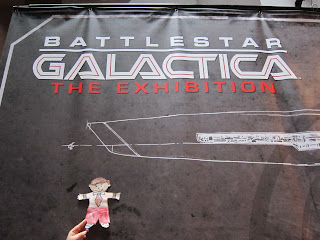 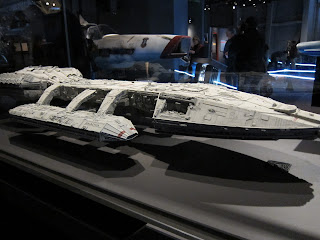 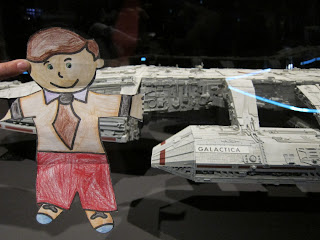 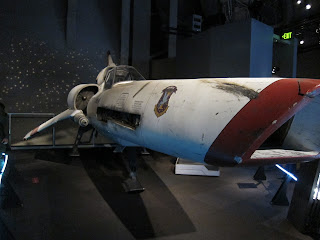 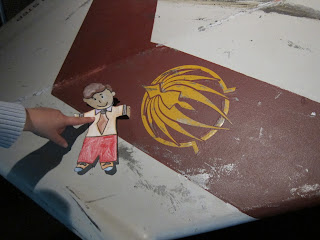 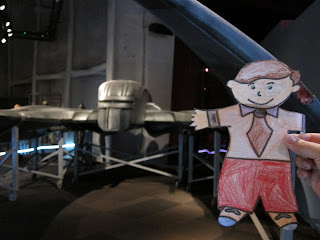 This is the cone of guitars in the center of the museum.  It was pretty cool. 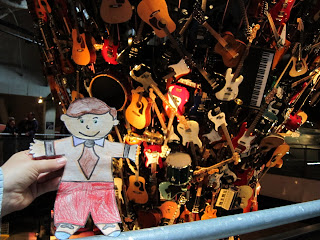 Finally I visited the Google offices in Seattle.  Ken works there designing Google things like Gmail and Calendar and Maps.  The office is on the banks of the ship canal down from the Ballard Locks.  Lots of smart people work there and they certainly love their jobs.  The office has lots of games and distractions to make sure people don't work too hard but they still do. 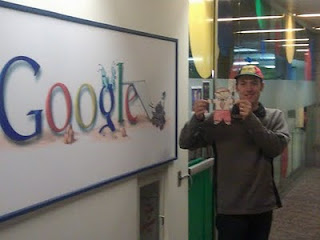 Well everyone, I've enjoyed my stay in Seattle but now I'm off to Mountain View, California.
Hello to all my Greenville Elementary friends in Mrs. DeJaynes class.  I hope you are all excited about Halloween. I look forward to more adventures and will talk to you soon.
Your Friend,
Flat Stanley
at 9:15 PM No comments:

Like a cherry on top of a giant sundae, my week of fun events with cool (and/or famous) people ended when Angela and I "maraschinoed" it by having a lovely dinner out at Il Fornaio and then attending a benefit concert hosted by Rainn Wilson at the Paramount last night.  It was to bring awareness to the Mona Foundation, a charity dedicated to supporting universal education for children around the world.  We had a great time but I'm sorry to say we are not fans of the Blitzen Trapper Band.  I do think we may come around on Andy Grammer though.  Great energy, that guy.
Enjoyed a lovely night out with Angela.   I tried not to look drunk from the one glass of Chianti I had at dinner.  Fail.

Could this week get any more exciting?  From seeing Alan Wilder at the Triple Door to spotting Dave Matthews shopping for pet food to a weekend-long visit from my cousin Angela to the Battlestar Galactica Exhibition in Seattle--Woot!   The EMP/SFM is hosting this world premiere event that opened this weekend.  To kick things off, they had the creators of the original BSG and the re-imagined version as well as some of the notable actors on hand to celebrate and be on panels Saturday.  Since I never got to see them during the shows run at any of the comic cons or events, I felt this was my time to indulge.  It also coincided with Ken being out of town and Angela visiting.  But she offered to watch Sidney while I attended with Shannon who, I did not know until very recently, had seen the entire series and liked it.  Also accompanying us: Flat Stanley.

Overall, it's a great exhibit and such fun to see the props/costumes up close.  They also have several video stations set up rolling interviews of the creators and the actors about various topics regarding the series.  It gives a nice overview and pays homage to both series.  The panel was fun and while Bill Adama is a man of few words, Edward Olmos is not.  He did most of the talking.  But that's cool, he's quite accomplished.  I did get to ask a question of the panel which was "now that you worked on such an amazing project like BSG, how did/does it affect your future projects/work."  Kate Vernon admitted that sometimes, you just gotta pay the bills but at least they all had this amazing experience.  I tend to agree that there are moments in life where you know what you're doing won't be matched by another similar experience ever again.  I can only think of one other production of the caliber of the re-imagined BSG and that is the Lord of the Rings movies.

Something that bugged the s**t out of me during the panel was the presumptuous questions and behavior by some of the attendees.  This one guy started out his question with "I think I speak for everyone here..."  Dude, you don't speak for me so stop acting like you do.  You're in a room of 190 people (most of them you don't know) so just ask your question.  Second, hysterical girl who raised her hand with oh, oh, oh--like she's the teacher's pet answering history questions in 3rd grade. Then when she was called on she made a big production of wanting to ask two questions.  Lady, calm yourself.  Ask your *brief* questions and be seated.  I mean, yes, I was wearing a Frakking Magical Unicorn T-shirt but I know the rules.  Anyway, enjoy the pics from the new camera that excels in working under strained light conditions.  So say we all.