Frolicking in the Fan Fic Forest

And I'm back.
I just took the Internet equivalent of an oversees sight-seeing tour. After the momentous lead-up to Sidney's 1st birthday and Ken's Grand Canyon adventure, I needed a break to regroup, focus but (more importantly) consume.  Consume media that is.


For anyone who doesn't know what fan fiction is--it's a way to expand upon an established universe and canon of characters by writing stories that are unauthorized but intended for fans. The modern version of this phenomena was noted to start with Star Trek and has blossomed to the point that fanfic probably exists for 90% of all story, movie, cartoon & TV show universes. There are some VERY talented writers out there who have devoted a lot of time, passion and writing ability to this pursuit. They get no money from it and seeming live on the praise and comments of their readers. I read one based on Lord of the Rings that was so Tolkien-esque that any hardcore LOTR fan would be proud. The amount of detail was astounding and it was all well researched and highly satisfying sub-story in tandem with the main storyline from the introduction of Rohan in the Two Towers to the Corination of Elessar. Not to mention it turned the normally "PG" story into a hard "R". To be fair, that's realistic. You can't tell me that stuff wouldn't be going on in the background. But one can wander the halls of fan fiction until the end of time. There is so much stuff out there.

This journey for me all started as I rediscovered this old cartoon I used to watch on weekday mornings when I was in 6th grade called "The Galaxy Rangers." I was a geeky little nerd even then. At the time (1986) it was using computer animation in tandem with anime style. That was pretty cutting edge, evidently. The stories were kind of cheesy but the characters were likable. Clearly there was a fan base who agreed with me. They just released all the episodes on DVD and I have been Netflixing them. No guts, no glory. I would wager some nuggets of this show that may have influenced Firefly.

One thing that surprised me though was the amount the fanfic I found for the movie Labyrinth--also of 1986.  Clearly many people felt Jareth and Sarah needed a romantic plot line.  There was so much of that.  I like fan fic especially because you can explore a facet of the story that you feel needs to be told or in the case of Aliens 3 & aspects of Battlestar Galactica, simply retold.  I cannot express how angry I was at the beginning of Aliens 3 when they killed off Newt & Hicks.  After all they went through to escape in Aliens and then to open the next movie with them just dying in the shuttle crash.  STUPID.  That has sat badly with me for years.  For some stories, you can really get into it so deeply and care about the characters so much that you want to keep going beyond what their creators presented.  I applaud these people for doing it.  (Of course some of the exploration or retelling is just fanciful, indulgent smut.  Naturally.)

But it's time for me to emerge from the fan fic forest and get serious about creating again.
at 10:36 PM No comments:

"We use it. While it's not perfect, it definitely helps us see our spending and saving trends in real time. That's illuminating."
~Kali
With Mint, you can:

* Get set up in minutes
* See all your accounts in one place
* Set and track your budgets & achieve your goals
* Find hundreds of dollars in personalized savings
* Stay safe and secure...and it's free!
View >>
at 12:30 PM No comments:

This was our first major BBQ/House party since Ken's 40th Extravaganza. Oh what a difference a few years has made!  The most obvious is that we are now parents but the second most obvious is that so is everybody else. The Tomassi-Nunnelly clan kicked it all off five years ago and for the longest time they were pretty much the only ones (and the Riches) at our parties who had kids.  Flash forward to today, literally everyone had a kid.

Some of these families we see pretty regularly, but some we don't.  It made me long for more time with these folks and wish that we could chat more often.  I feel like the pre-pro I did for the party helped me be able to focus on Sidney and her needs.  Prior to the party, Ms. Sidney slipped and her sharp lower teeth cut into her upper gums/palette.  She was bleeding from the mouth the entire party.  She looked like a little vampire in training.  So specifically for that reason, I kept her in the carrier so that she would keep her bloody hands off things and not be putting her hands on the ground, which in turn go in her mouth.  The injury was minor but she bled on her clothes and many washcloths/burp rags.  Crazy.

Ken manned the grill and kept everyone fed.  He had been watching Sidney prior to sparking the grill.  That gave me just enough time to make sure most stuff was in order.  But I used to think being a hostess splintered your attention and ability to converse---not even.  While trying to feed Sidney her bottle as she was sitting in the carrier facing me, she kept whacking me in the cheek with it.  I actually thought that would be a chance for me to talk for once.  Nope.  It's good for us to see what it takes to do a large party.  As we learned in Hawaii, a babysitter or family member would have been ideal.  Next time.


Top 5 thoughts about babies/children + parties.
1. Booze and babies can go together.  You just have to try hard enough. 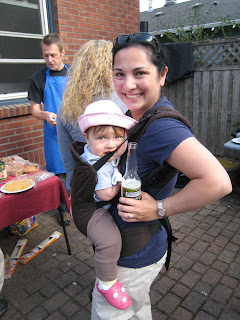 2, If you can complete a sentence without being interrupted, that's good.  If you can feed a baby and maintain a conversation, then you deserve a metal. 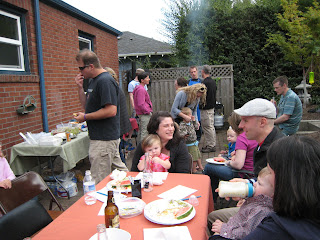 3. You're not going to be the one deciding when it's time to go.  Hunger, Tiredness, Boredom or Over-Stimulation will do that for you.  And it will be earlier than you think. 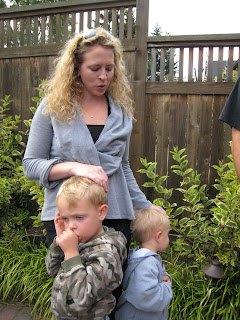 4. A landscaped backyard becomes an unintended minefield of danger or an endless opportunity for discovery--depending on your perspective (i.e. age).  Did you know we have a sandbox in our flagstone patio?  Neither did we. 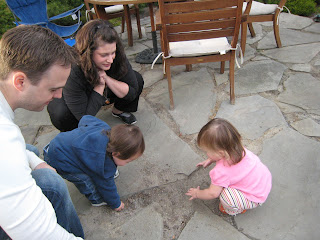 5. Don't sweat it.  We're all parents now.  We all know how challenging that is alone, then add throwing a party on top of that.  Make it easy on yourself--use signs, put out extra garbage bags, make sure the coolers are full of beer, know some "yes" RSVPs will flake and of course you will overbuy stuff no matter what the Evite says.
********
Most importantly, here are some of the beautiful families we had the pleasure of seeing today.  Not pictured are Ian, Christina & Emmy. 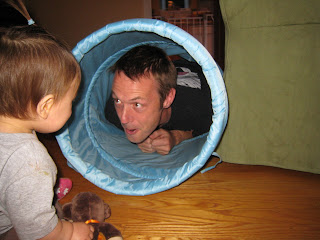