How did we get here, you ask?

Back in early 2010, my do-gooder husband happened upon a display at the Ballard Farmer's Market detailing The Friends of Woodland Park Zoo Elephants work about getting the three animals to a sanctuary. I would have never guessed in a million years that he would have taken up this cause. But in my old age, I am more often surprised than proven right when it comes to Ken.

By July of 2010, Ken produced an animated video succinctly detailing the exact plight of the Woodland Park Zoo Elephants and putting things in perspective.


Despite being Riveting, heartbreaking and obvious about what to do next, it seemed like the arguments of the elephant activists fell on deaf zoo board ears.

I must admit though, (and I can't believe I felt this way) the zoo was a great place to take young kids: amenities everywhere, it's fenced and enclosed, everyone loves to see animals and you get exercise walking around outside. I even had fond memories of going to the zoo myself as a child and I wanted my kids to have that too. But despite whatever nostalgic ideal I had in my mind, that was a selfish way to look at it and conveniently disregarded the animals themselves. I soon realized this.

Come 2012, rumors and rumblings surfaced that an unflattering article detailing the plight of the elephants would surface. And so it did. The Seattle Times published a damning expose' called Glamour Beasts about the Zoo's treatment of elephants and the quest to produce a newborn baby elephant. It's a gut-wrenching read and will make you feel simultaneously angry and guilty for ever patronizing a zoo. General opinion began to shift. In response, the Zoo incredulously dug in it's heels and started saying it was going to expand the elephant program by bringing in more elephants.

Then six months later, Blackfish, the documentary about the terrible conditions for orca whales at sea parks, ignited a fervor against keeping highly intelligent animals in captivity. And it hasn't let up.

This past July, Ken and I went to South Africa and we were very fortunate have a number of connective and awe-inspiring sightings of wild elephants on a 2200-acre game reserve. 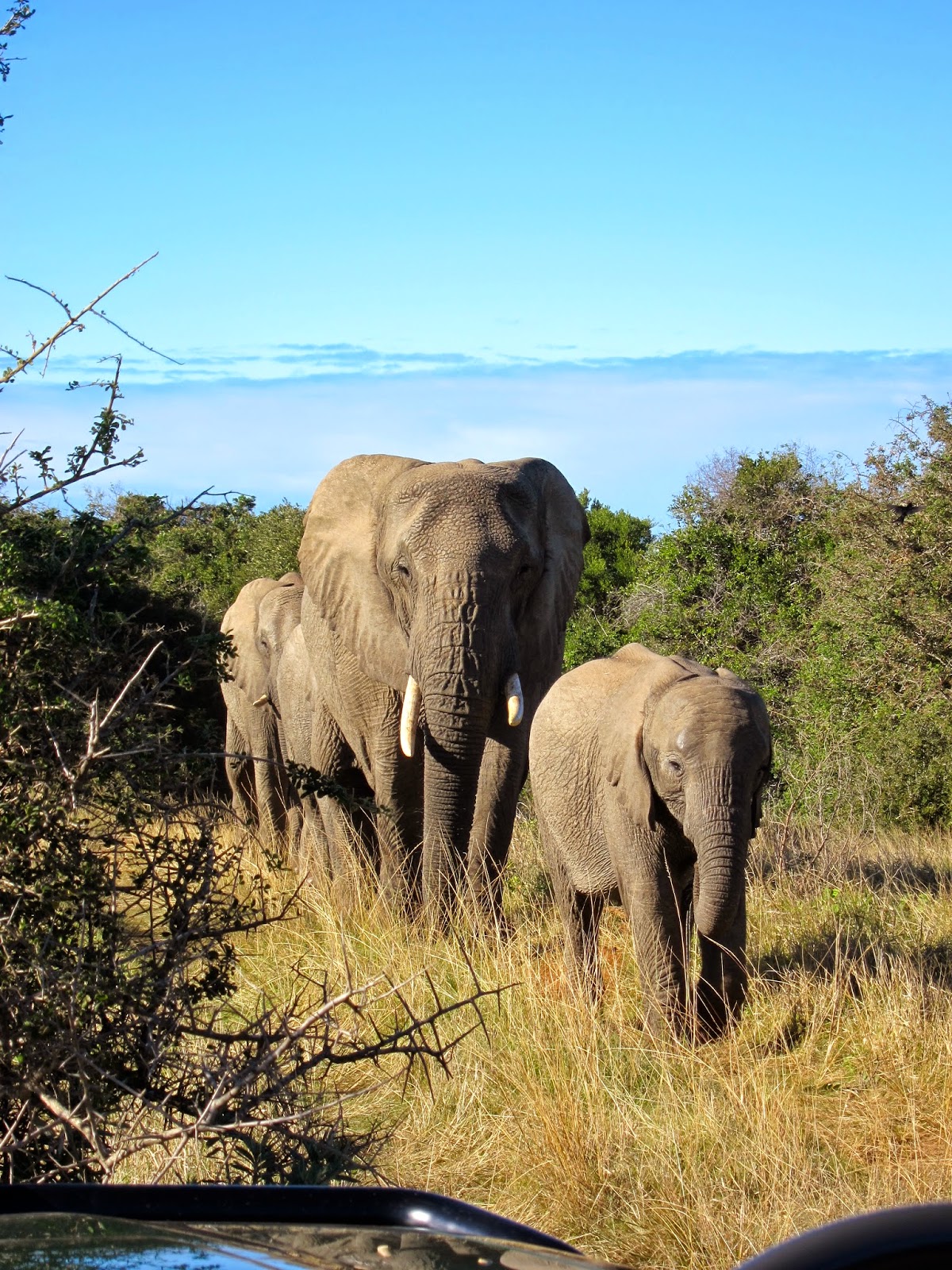 The experience was nothing short of magical. So I couldn't help but have strong emotions about the two disparate elephant experiences: the zoo vs. game reserve--especially given the sudden, preventable and captivity-induced death of Woodland Park Zoo's lone African elephant, Watoto, this past August.

So then the Zoo reversed themselves signaling the end of the elephant program.

The latest reporting this week from KUOW confirms that while the Zoo will close it's elephant program (Yay!), it plans to send the elephants to another zoo--not a sanctuary (No!). And these are last ditch efforts now to get the City of Seattle involved, to get the zoo board members to change their mind, to make them see that life in a zoo is not a life for an elephant you claim to care about.

Because an elephant in a zoo is not a full elephant, it's missing what comes from walking hundreds of miles, eating branches and fruit off trees, living amongst blood relatives and having an elephant's life. Saying that Chai and Bamboo have other work to do as species ambassadors is crap.  The Zoo Board must think we are nitwits who cannot like an animal without seeing it for our own eyes.  To which I'd like to say, can you explain the borderline obsession people have with DINOSAURS? You know, animals that have never been alive during our time.

I'd also like to point out that I fell in love with Great White Sharks at age 7 after watching Jaws and continuing to watch shark documentaries and read books about these animals well into adulthood. In wasn't until my late 20's that I *finally* stumbled upon one being rehabilitated at the Monterey Bay Aquarium, and yet, I still loved and appreciated these animals all that time without having seen one face to face.

Ultimately this is a really long way of asking people to email to the City Council to ask them for help pressuring the zoo to send these two elephants to a sanctuary. Thank you.
at 12:26 AM No comments: 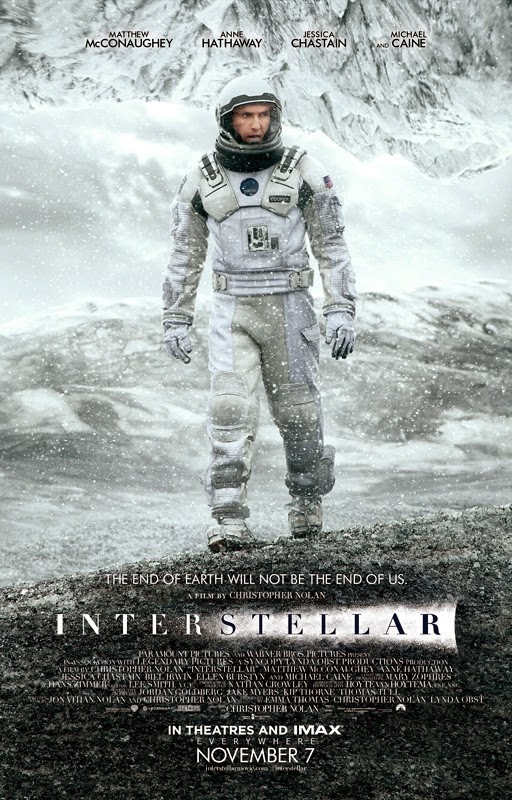 It's hard to miss the abundant cascade of varying opinion and commentary on Interstellar, the ambitious, 3-hour, and somewhat-science-accurate flick by Christopher Nolan. One of my favorite commentary pieces so far was this gem on Cracked.com by David Christopher Bell, where he uses terms like "dream journal" and "frogshits" to further explain how people love to critique Nolan movies.  I think this is mainly because Nolan's treatment and assumptions of space, worm holes, black holes, quantum physics and the Future boldly challenges the viewer to keep up with the story or at least, act like they do.

So Ken and I being the dutiful nerds we are, went and saw Interstellar in IMAX a few weeks ago since it was shot on that format--but for what important reason, I know not. Personally, I think you could see it in a normal theater and not miss much, even saving a few dollars to boot.  But what it did get us was Matthew McConaughey's 6-story-tall crying dad face.

And that is what I want to talk about.

Most of the discussion around this film is about the science and accuracy of the film OR the Nolan-esque qualities of the film OR the strange choices Nolan made in making the film.  What I haven't been able to find (hardly) is a parental perspective on this clearly parentally-themed film.

Survival of the species=ultimate parental responsibility

Here is a single dad (McConaughey, known as 'Cooper') who leaves behind his home planet and children in the hopes that he can save the entire human race. It's a bet on the future--a better future--which is something that parents inadvertently do. (BTW, the 'parents' I refer to are the ones who stick around and do the heavy lifting work of raising kids) Any way, 'hopeful' is what it is to be a parent because cynicism has no place.  Being cynical, it is a scary, hypocritical path to wander down once you've brought a defenseless, innocent mini-me into the world so you'd better find a way forward.

Being a parent is also taking responsibility for the propagation of the species which Cooper's character embraces whole-heartedly.  As he goes forth looking for a new home for the human race, he is figuratively and literally providing for 'his family.'  He and his crew are also shouldering the decision-making about what does or does not constitute a suitable environment--just as parents do.

What's interesting is that there are great efforts taken to make sure everyone else on the crew does not have ties maritally or parentally. But Cooper's fatherly instinct and connection to his child is what ultimately saves the entire mission and the human species.  People who have connections were initially looked upon as a liability or disadvantaged but the opposite is proven true.  Also when Anne Hathaway's character tries to make a decision based on love instead of science, she's rebuked but is later shown that following that path would have lead a habitable world and mission success.

I cried ugly when dying, old lady Murphy (Cooper's daughter) and Cooper exchange some final words as she's laying on her deathbed.  She says that no parent should see their child die, and well, that's true--it's not the natural order of things and so she pretty much tells him to leave. Yet the movie has been milking the tension of 'are father and daughter ever going to see each other again?' So when they finally do, after so much has happened, after being absent from so much of each other's lives but then only exchange maybe 5 minutes of dialogue--it's just, just so frustrating and heart-wrenching.  Uggh!

Now I can suspend disbelief like the best of them. But one thing I just could not get simpatico about was the logic of sending all those eggs into space--with one female astronaut.  Seriously though, who was expected to bear and raise all of the new human race? Not to mention, how much radiation is everyone and all the eggs on the ship being exposed during the journey?  (I suppose this is just stuff that comes to me because of being so focused on fertility to achieve both our pregnancies.) But Plan B didn't make a lot of sense unless you had an army of surrogates or the helper robots TARS, KIPP and CASE were equipped with some mechanical uteruses.  I'm just saying.
(UPDATE: I've been informed that there was a one-line throwaway explanation that there were 10 artificial wombs on board the ship.  So at the end of the movie that leaves Anne Hathaway being Decamom, single mother to 10 babies on an alien planet. Let the logistics of that rattle around in your mind for a minute.)

In closing, once you become a parent you have skin in the game. The game being the success of the human race and specifically facilitating a sustainable and fulfilling life for your own offspring.  So I think that's why the movie struck such a nerve with me. Interstellar may shoot for distant worlds but it really hinges on what it means to be a parent in this one.
at 1:16 AM No comments: