I first saw Lady Gaga (with Sarah) back in January of 2013 when she was touring the Born This Way Ball to support the album of the same name. But soon after her stop in the PNW, she cancelled the remainder of her tour because of an injury that required surgery. Even then, when I assume she was in great pain due to her-not-yet-announced fibromyalgia diagnosis and experiencing extreme angst about her condition, yet she delivered a high-energy, athletic show.

Flash forward six years. In February, I'd heard that Lady Gaga was going to add more 2019 shows to her Las Vegas Residency later in the year. I hadn't been to Vegas since well before my babies were born--over 10 years. So I thought, why not? Ken said he was up for it and we kept it easy. I think he especially enjoyed the low 70's highs.

But soon after we landed I realized things had changed. The difference between doing Vegas at 45 now is that I personally wear way too much clothing to fit in and the contact high from all the legal cannabis enjoyed by fellow revelers makes drinking almost unnecessary. A perfect Vegas vacation now includes taking a long hot bath alone in a jetted tub while also being able to watch cable television uninterrupted. So that's something. We also ate fancy food that the kids would hate and took Lyfts everywhere. One driver even smashed my fingers as he closed the window without realizing I was holding on to the door frame. Luckily Ken had a cup of ice water that I commandeered. No tip for that driver. 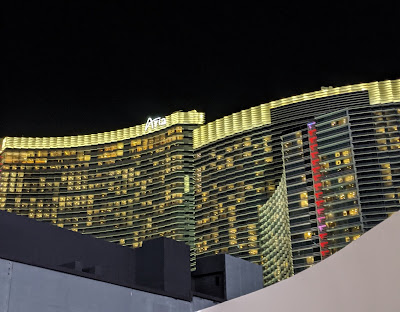 Downtown (Old Town) Las Vegas does not disappoint!
Come for the $5 craps tables, stay for the street chaos and
nearly-naked goatman. #vivalasvegas 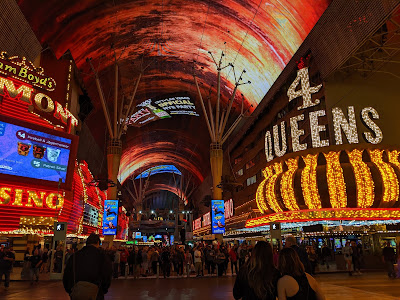 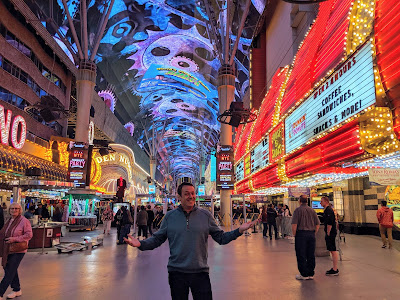 Saturday morning we ventured out to the Neon Museum where signs from bygone Las Vegas continue to live in infamy. Currently they are featuring art installations, "Lost Vegas" by
Tim Burton, interspersed among the permanent collection also.
(We're told it's amazing at night!) 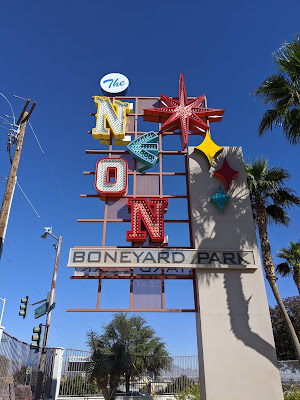 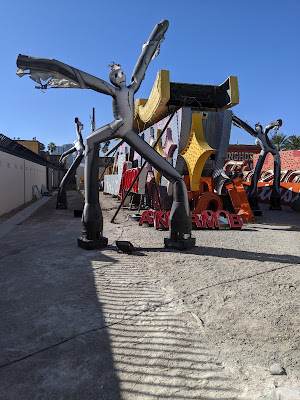 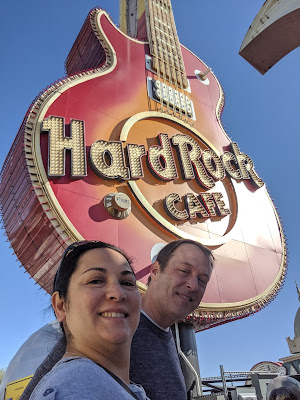 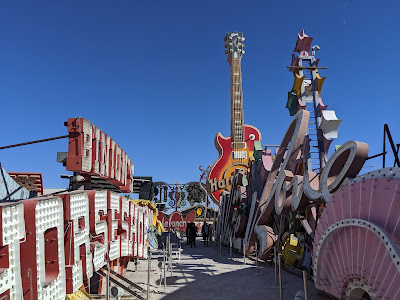 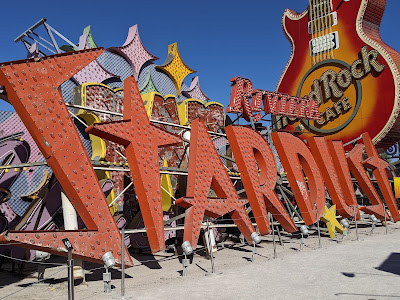 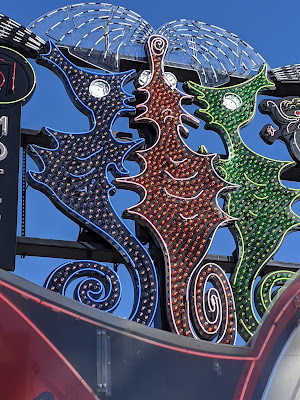 Finally, drinks, bites and silly photos at the
Waldorf Astoria SkyBar before the show. 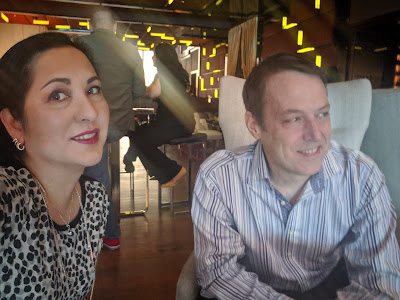 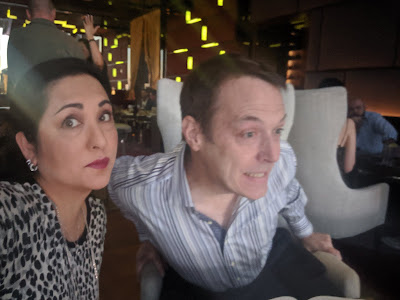 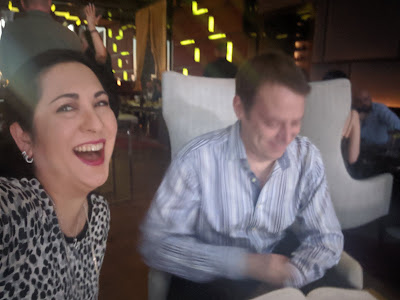 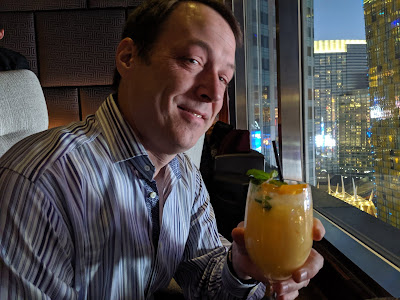 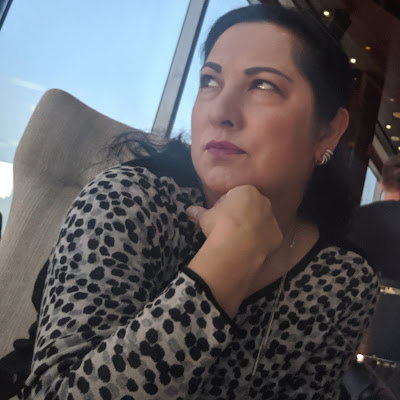 While she might not be everyone's taste, LG is incredibly talented and driven. She performed with a sinus infection and fever, she later informed us, and yet you could not tell. Her shows are high-energy and the singing is very muscular so she has to give 100% to pull it all off and she did. But I hope she got to go home and drink tea and rest. I love that she played some of my favorite dance songs from her early work and some less popular tracks like 'Aura' and 'Government Hooker'. She also presents interesting staging like being suspended from the rafters on wires high above the audience while descending down to the stage playing a keyboard guitar for 'Let's Dance.' It's all a spectacle to behold and she promotes self-love & acceptance above all.
Let that freak flag fly! 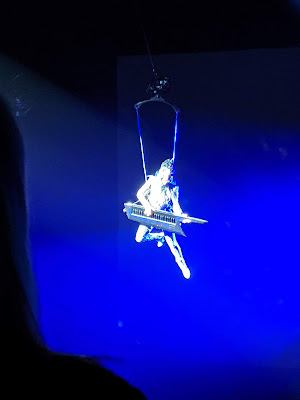 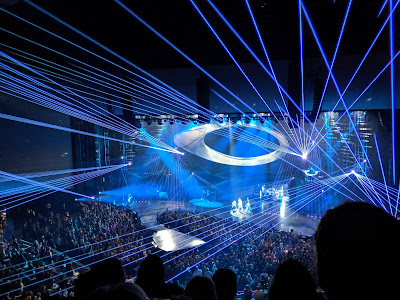 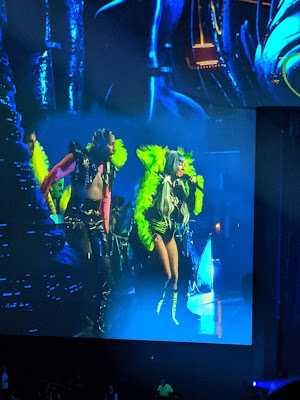 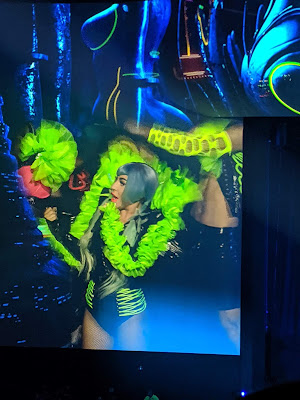 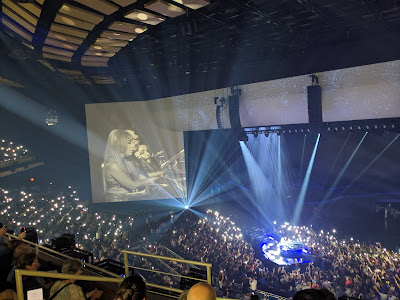 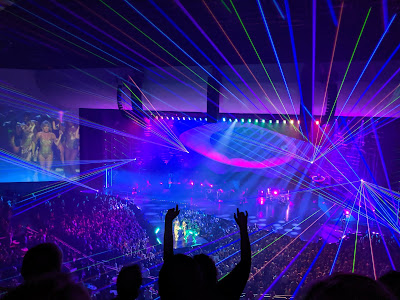 Here's a snip from her encore of "Shallow"

But alas after losing net $60 at the craps tables and continually drifting through cigarette smoke-smelling casinos and restaurants, with no amount of lotion or water to make you feel properly moisturized, it was time to go home. Thanks Gaga & Vegas--see you in another 10 years.

A gorgeous view on our flight home: dormant & formerly active volcanos, just waiting for their moment


Many thanks to Dad and Ann for watching the kids for the weekend and keeping them so busy! 💗
at 1:46 AM